PokerStars has announced that its ninth anniversary “Sunday Million” tournament on Sunday March 8th will have a guaranteed prize pool of $9 million. 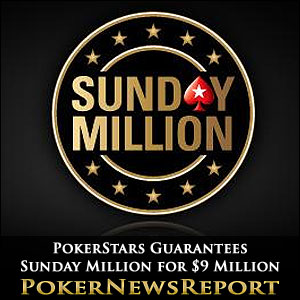 PokerStars has announced that its ninth anniversary “Sunday Million” tournament on Sunday March 8th will have a guaranteed prize pool of $9 million.

PokerStars´ Sunday Million $1 million guaranteed tournament was first played on March 6th 2006, when 5,893 players ponied up the $215 buy-in to create a $1,178,600 prize pool. The event was won by Daryl “aaaaaa” Jace for $173,844 and ever since the Sunday Million has been recognised as the primary event in the weekly online poker calendar.

Consequently, in keeping with what now has become a tradition at PokerStars, the world´s largest online poker site is celebrating the ninth anniversary of its Sunday Million by offering a $9 million guaranteed prize pool that reflects the longevity of the event.

How to Play in the 9th Anniversary Sunday Million

Players wishing to compete in the ninth anniversary Sunday Million have a variety of options available to them. Direct buy-in is available for $215.00, there is a comprehensive satellite route as usually exists for the site´s premier tournament, and PokerStars will also be hosting a series of unique satellite tournaments with seats in the target event up for grabs.

The first of these events is a VIP Bash Satellite which will be played on Saturday 7th March at 14:30pm (ET). The tournament has a buy-in of 500 Frequent Player Points (FPPs) and guarantees a minimum of 50 seats in the ninth anniversary Sunday Million. Two qualifiers for this event will take place earlier in the day (12:30pm and 14:00pm) – each having a buy-in of just 50FPPs.

PokerStars will also be hosting two “Deadline Satellites” immediately before the target event gets underway on Sunday 8th March. The first of these has a buy-in of $11.00, kicks off at 13:20pm (ET), and guarantees a minimum of 1,000 seats to the Sunday Million. Twenty-five minutes later and a $33.00 buy-in satellite gets under way with a guaranteed minimum of 333 seats in the Sunday Million up for prizes.

Feeder satellites to the $11.00 “Deadline Satellite” are running every hour in the PokerStars client, and the ninth anniversary Sunday Million tournament starts at 14:30pm (ET) on Sunday March 8th.

In Other PokerStars News …

While details were being released of the ninth anniversary Sunday Million, the news also broke that PokerStars would not be accepting Bitcoin deposits in the foreseeable future. In a statement released to the digital currency website Coindesk, a representative from PokerStars denied reports that the company was finalising Bitcoin integration into its cashier. The brief statement read:

PokerStars has no immediate plans to implement Bitcoin and it is not on our development roadmap.

The company´s reluctance to offer a Bitcoin banking option to players is possibly due to their presence in a number of locations considered to be “grey areas”. Despite withdrawing from twenty countries in October, PokerStars stills supplies a service to Germany – where federal laws prohibit online poker – and to Russia – where the authorities are introducing processes to block payments to unauthorised gambling sites.

With a significant proportion of the company´s revenues generated from jurisdictions in which it is effectively breaking the law, it seems unlikely that PokerStars would want to get involved with a crypto-currency that itself has a reputation for not exactly being squeaky clean. Nonetheless, PokerStars´ statement to Coindesk did come with the caveat that the company is continuing to monitor the situation.