Fast-fold poker has achieved tremendous popularity and PokerStars may be aiming to corner the U.S. market by winning U.S. patent approval. 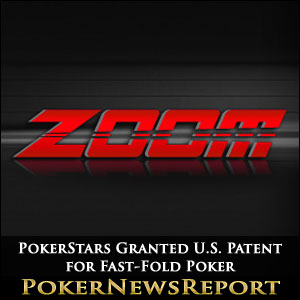 Fast-fold poker has achieved tremendous popularity and PokerStars may be aiming to corner the U.S. market by winning U.S. patent approval.

The United States Patent and Trademark Office (USPTO) issued parent company the Rational Group a patent on Zoom Poker last week, the original application of which belonged to Full Tilt Poker and its application for Rush Poker. Since Full Tilt was acquired by Rational Group in 2012, the intellectual property rights of FTP’s patent were assigned to PokerStars.

Full Tilt had attempted to secure patent protection on its innovative fast-fold Rush Poker concept as early as 2008. The USPTO had rejected applications on numerous occasions, yet Rational Group continued trying to gain approval from patent examiners after taking over the reins of FTP following the purchase of the company assets from the DoJ two years ago.

PokerStars took the suggestion and ran with it, submitting new claims after withdrawing previous claims regarding the manner in which players are whisked away to a new table upon folding out of turn, so to speak. The new submissions satisfied USPTO examiners, who are set to publish their decision within a week or so.

The granting of patent protection could have an impact on online poker in the U.S. Poker sites who legally operate in the country may not be permitted to offer fast-fold poker if PokerStars owns the patent rights. The USPTO decision has no bearing on activities outside of the U.S.

However, a U.S. gaming expert told eGR that there appears to be much room for challenging the patent. Attorney Bill Gantz indicated that PokerStars’ winning approval of the patent may not be the last word on the matter and that he expects the patent issuance to be contested.

Full Tilt rolled out Rush Poker in 2010. The fast-fold concept has since been copied by practically all the major poker rooms and networks. Blaze Poker, Speed Poker, FastForward and Zone Poker are some of the names used by the industry mainstays who have been offering the product.

Live poker tends to be a slow, deliberate game. Online poker speeded up the action considerably with the cards shuffled randomly and dealt automatically. Fast-fold poker takes the action to entirely new speed levels, doing away with waiting around for other players to act.