In anticipation of dealing its 100 billionth hand in June, PokerStars has revealed a slew of promotions that will give away $5 million in cash. 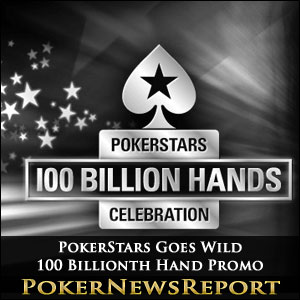 In anticipation of dealing its 100 billionth hand in June, PokerStars has revealed a slew of promotions that will give away $5 million in cash.

In previous months, the “Road to 100 Billion” promo has awarded money to winners of milestone hands upon approaching both 90 and 95 billion hands dealt. But the extravaganza in store leading up to and including the 100 billionth hand will be like no other.

Cash game players have benefited greatly from milestone hand promotions in the past and that will be duplicated for the big 100 billionth hand as $2 million will be doled out to lucky winners. The fun begins at hand no. 99,700,000,000 and every 1 millionth hand following, with players participating in the 100 billionth hand to share $1 million.

At least $100,000 will go to the winner of the 100 billionth hand, with players at the same table each getting at least $10,000. PokerStars will kick in another $2,000 for every VIP Player Point earned over the last 50 hands to those players. Those fortunate to be playing at the same stake level and game type as that of the table of the 100 billionth hand will also share in the cash rewards.

A new twist to the “Road to 100 Billion” will reward tournament players in addition to those who frequent ring game action. SitNGo players will be able to cash in from June 17 to June 23. During that week, random tables will be selected as winners of the “Golden SitNGo” promotion in which the prize pool will be increased by an amount that can be as high as ten times the original prize pool. Players will know before the cards are dealt if their table has been chosen via a pop-up message.

Freeroll tournament players are also included in the fun on June 30 when a $1 million Ultimate Freeroll will reward $50,000 to the champion and distribute the remaining $950,000 to players who finish respectably. Players can enter by ticket only, but tickets will be given to players who make at least a $50 deposit. Those who would like to enter without depositing can do so by winning a Trivia Freeroll from June 5 – June 29. One hundred such freerolls will be hosted, the entry of which is available by successfully answering a PokerStars trivia question.

PokerStars also plans to break its own record for most players entered in a tournament by staging the World Record Tournament on June 16 with an entry fee of only $1. A $300,000 guaranteed prize pool with the winner receiving $25,000 is on tap for the first 225,000 players who enter. The number of entries is capped, but is destined to beat the previous record of 200,000 players and also guarantees an overlay of $75,000.

Players who enjoy fast-paced action will not be left out of the fun, as Zoom Poker players are also eligible for cash prizes. Fast-fold ring game players who win specially selected hands can gain up to $100 by sharing their winning hands on the BOOM Hand Replayer. And a $1 million guaranteed prize pool is available for players who enter the Zoom 100 tournament, the first-ever of its kind.

PokerStars’ 100 billionth milestone hand promotion has something for everyone, including cash game, tournament, SitNGo, and Zoom Poker players. The excitement will be wild next month as $5 million in free cash will be given to PokerStars’ loyal players.