PokerStars has announced that a total of $5 million will be awarded to players during the site’s “Road to 100 Billion” hands promotion. 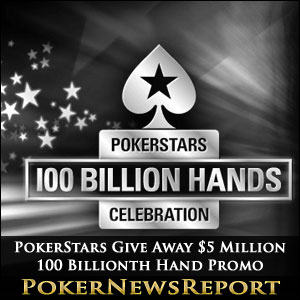 PokerStars has announced that a total of $5 million will be awarded to players during the site’s “Road to 100 Billion” hands promotion.

The world’s top poker site doled out $1 million up to and including both the 90 billionth and 95 billionth hands. Those milestones were reached late in 2012 and February of this year, respectively. But the prizes will increase five-fold for the 100 billionth hand celebration. That milestone hand will likely be dealt in the latter part of June.

Players lucky enough to be dealt into the 100 billionth hand and playing at the same stake level will all share a $1 million prize. The winner of the mega milestone hand is guaranteed at least $100,000, while a lesser cut will be distributed to players at the same table.

An additional $1 million will be awarded to players playing in selected milestone hands leading up to number 100,000,000,000. Another $3 million is available in a slew of special promotions that will include cash games, SitNGos and multi-table tournaments (MTTs). The details have not been revealed by PokerStars as yet, but should be announced shortly.

Players are encouraged to spread out their play in ring game action to include playing at multiple tables and at various stake levels during the promotion in order to increase chances of being dealt into milestone hands and winning free cash.

The “Road to 100 Billion” has been a very popular promotion, with player traffic increasing substantially at the 90 billionth and 95 billionth hands. The 100 billionth hand promises to be even more spectaculair than those milestone hands with such large cash prizes available.

PokerStars has been dealing virtual hands since 2001 and has become the industry’s most dominant presence. The website’s seven-day average of cash players currently stands at 21,000, which is over seven times more than the no. 2 ranked site. The site holding down second place at the moment happens to be Full Tilt, the sister site of PokerStars, with both falling under the ownership of the Rational Group.

[isGeoAllowed]If you still have not played at PokerStars, [geolink href=”https://www.pokernewsreport.com/pokerstars”]check our PokerStars review[/geolink], start playing and take a shot at winning a share of the $5 million in bonus money being given away in the 100 billionth hand promotion.[/isGeoAllowed]