PokerStars has appealed a New Jersey judge’s decision that allowed the Atlantic Club casino to terminate the acquisition agreement between the parties. 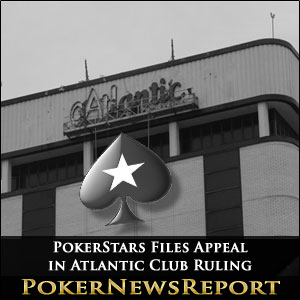 PokerStars has appealed a New Jersey judge’s decision that allowed the Atlantic Club casino to terminate the acquisition agreement between the parties.

Intent on entering the U.S. online poker market, PokerStars seeks an appellate review of Judge Raymond Batten’s ruling that found the world’s top poker site to be tardy in securing a casino license by April 26 as specified in the agreement in order for the acquisition to proceed. The judge’s May 17 decision meant that PokerStars would lose the $11 million already paid to the Atlantic Club toward the purchase price.

PokerStars’ 34-page appeal cites a number of errors made by Judge Batten. Key among those errors is PokerStars’ contention that April 26 was not a fixed date in which a casino operating license needed to be secured. PokerStars insists that the purchase agreement did not hinge on this date and that it was understood that New Jersey gaming officials would possibly take longer to rule on PokerStars’ license application.

PokerStars further argues that Batten’s decision virtually puts an end to state gaming regulators’ desire to continue suitability investigations since the acquisition agreement is no longer pending. Whether or not the sale would ever be allowed to go through, it certainly would be interesting to see if PokerStars would be deemed as a suitable casino license holder by state gaming officials in light of allegedly violating the UIGEA and continuing to operate in the U.S. market while others withdrew.

PokerStars also claims that the judge’s ruling was based on documentation that was never entered into the court record as evidence. This alleged error was in addition to the contention that Judge Batten allowed testimony from certain Atlantic Club witnesses that was improper, the Press of Atlantic City reported.

PokerStars is on the hook for another $4 million payment to the Atlantic Club for failing to live up to the stipulations of the contract. This termination payment would bring the total shelled out to the casino since last December to $15 million, which happens to be the agreed upon purchase price.

The $11 million already lost by PokerStars was paid out in weekly $750,000 installments to the Atlantic Club to keep the struggling casino operating. While the Atlantic Club had been consistently losing money for quite some time, there are indications that PokerStars’ bailout has proven successful in reviving the casino.

Recent figures released by New Jersey gaming officials show that the Atlantic Club is on the rebound. Revenue was up 25% in May and the percentage for 2013 is slightly higher than that. And with online gambling expected to launch in the Garden State in November, the once-floundering casino now looks to be perhaps a worthwhile investment.

It is now up to a New Jersey appellate court to decide if PokerStars’ attempt to purchase the Atlantic Club was wrongly terminated by Judge Batten. With a possible entry into the U.S. marketplace hanging in the balance, there is a lot at stake. Batten’s ruling had allowed the Atlantic Club owners to put the casino back on the market, but PokerStars seems commited to gaining ownership. Stay tuned, as this legal skirmish is far from over.