Martin “phasE89“ Balaz, a poker pro from the Czech Republic, won a proposition bet in which he wagered that he could turn a profit, not including rakeback, playing in 24,000 Fifty50 SitnGos (SnGs) throughout the month of October. 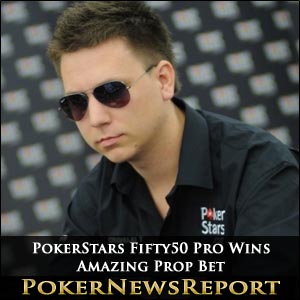 Martin “phasE89“ Balaz, a poker pro from the Czech Republic, won a proposition bet in which he wagered that he could turn a profit, not including rakeback, playing in 24,000 Fifty50 SitnGos (SnGs) throughout the month of October.

“I always liked prop bet challenges,” Balaz said. “I like to show to other people what is possible when you are truly motivated.”

The Fifty50 SnGs on PokerStars, also sometimes referred to as double-or-nothing tourneys, pay out to the top five remaining players of the ten seated at the table. Balaz said he tried many different formats and types of games before realizing that Fifty50 SnGs suited him the best. Because Balaz plays a lot of poker and also studies the game meticulously, he has earned the status as being one of the world’s most successful poker players at Fifty50 SnGs.

Introducing his prop bet to other gamblers on a popular poker forum thread, Balaz gave himself 3 to 1 odds in accomplishing his proposition. He found takers for $4.5 thousand, meaning a profitable October would earn him $13,500. Several of the rules of the bet laid out beforehand were that gamblers with a piece of the action could not sit at an SnG and play against Balaz, the bet would become void if the Czech Republic decided to ban online poker during the month and Balaz would affix a live webcam on himself during his play to prove it was he who was competing.

Balaz first began prop bet wagering on Fifty50 SnGs in June, playing 12,000 tourneys for the month. Turning a profit at that volume was relatively easy, he discovered, so he upped the ante for October. Initially attempting the feat at buy-ins of $30 to $200, he was forced to alter his parameters a little bit by also entering $15 buy-ins when he discovered that SnG traffic on the world’s largest poker site was a little lower than anticipated. When Oct. 1 arrived, Balaz logged onto his computer and began his quest.

To become successful, Balaz felt it necessary to establish a daily routine, but he quickly discovered that some adjustments would have to be made. “I planned my daily routine in September and I even considered jogging in the morning and coaching my study group,” Balaz admitted, “but soon after the start of the prop bet I found out that I did not have much time to do that and I had to adjust.”

“Usually I woke up at 10:00 a.m., took a shower, got some breakfast and read the news on the Internet,” he added. “At about 11:00 a.m. I went shopping and when I came back home I began to grind. I played three to four sessions a day of three to five hours. I was eating light food regularly, drinking mostly water and from time to time some energy drinks. I went to bed at 4:00 a.m. I believe that the regular schedule is the key for these kinds of challenges.”

Balaz’s prop bet started out horribly as he experienced a huge downswing and was losing nearly every day in the first two weeks of the month. “I thought how the f**k is it even possible to run this bad,” Balaz said.

Due to the horrendous start, Balaz shifted to more poker games at lower stakes. However, another problem occured, this one being technical. Many of the SnGs in which he registered wouldn’t open, which meant Balaz was considered to be sitting out and he was blinded out of the tourney. Because of multi-tabling 50 SnGs at a time, the Czech pro failed to notice the technical glitch until SnG regulars informed him about the error. It goes without saying, the technical problem was a huge obstacle in attempting to achieve his goal of being profitable for the month.

The glitch lasted around ten days and Balaz discovered that the cause was his Table Ninja application. A minor update fixed the problem, but the downswing and technical issues were a tremendous shock to Balaz’s confidence and momentum. Down about $16,000 on Oct. 22, many who were following his progress thought that Balaz’s bet was history. Those who had wagered against him began premature celebrations on their seemingly good investment.

“There were three moments when I really doubted that I could win,” Balaz said. “First was when I had a massive $13.5k downswing after just 3,000 games — that was not really a good start to my prop bet at all. Second crisis was after 12,000 games when I was halfway through the challenge and according to Sharkscope I was down $16,000, at this point I still hoped that it would turn around if I got lucky, but I was convinced I had just about a 20 percent chance. Third, the last moment when I thought I might lose, was when I got sick (at 15.5k games played). I was not able to grind at all for eight hours and I really doubted that I could get better and win the bet. After eight hours of lying in the bed and drinking tea I got miraculously better. I had to grind for two days straight to get on my volume pace, but I made it, as well, and at this point I knew that I could win my challenge.”

In the final week of the month, playing non-stop, Balaz miraculously erased the deficit of $16,000, turning a profit of almost $3,000. While three grand is a nice addition to any player’s bankroll, the pride in winning the proposition bet meant much more to Balaz.

Balaz’ next goal is to become a PokerStars Supernova Elite by 2011’s end. He’s also pondering a 36,000 Fifty50 SnG feat for next year and is shooting for 3 million total VPPs in 2012 also. However, those ambitions are mere stepping stones on the way to his ultimate goal, to become a Team PokerStars Online member.

With his past results and dedication to the game of poker, the realization of that goal may be only a matter of time.

If you want to make some fame yourself, check out the exclusive Poker News Report $10 Million Satellite that will run on [geolink href=”https://www.pokernewsreport.com/pokerstars”]PokerStars[/geolink] at the 20th of November.