PokerStars’ 10th anniversary celebrations continue today aiming to attract the largest online tournament field ever assembled with the staging of their $1 event that guarantees a $250,000 prize pool. 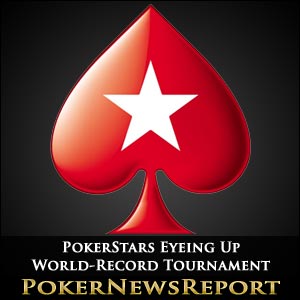 PokerStars’ 10th anniversary celebrations continue tomorrow as the world’s biggest poker website aims to attract the largest online tournament field ever assembled with the staging of their $1 event that guarantees a $250,000 prize pool.

Picking up a victory from this tournament would certainly be quite some achievement as PokerStars are hoping to have at least 150,000 entries registered by the time play begins at 17:30 UK time today.

PokerStars are definitely giving the event some extra attention with a radio show, which will be hosted by podcaster Joe Stapleton and poker pro Nick Wealthall, being aired during the tournament.

British and Irish entrants are being offered some extra incentives to do well as the leading five finishers from these nations in the expected record-breaking field will be handed $215 tickets for PokerStars’ 10th Anniversary Sunday Million, which will have a $10 million guaranteed prize pool.

Those finishing in places six to 100 haven’t been forgotten, though, and will still leave with a Sunday Storm ticket valued at $11.

If all this wasn’t enough to help players celebrate PokerStars’ 10th year, then what about the offer of at least $750,000 being given away to commemorate the website’s 72 billionth hand?

Yes, you read that correctly. It does sound fantastic – and so it should as over 1,000 players will actually enjoy a share of that massive money pot during this month.

PokerStars normally set their milestone hands at each five billion played, but the [geolink href=”https://www.pokernewsreport.com/online-poker-rooms”]poker website[/geolink] has extended this to give players the chance to boost their account balances a little earlier.

Those lucky enough to win some money will be rewarded when the 71,770,000,000th hand is reached and every millionth hand from then until 72 billion will also be worth big bucks.

Additionally, every player involved in the milestone hand of 72 billion is guaranteed at least $10,000. Phew!

However, after some concerns, PokerStars have made a few changes to this promotion, with every heads-up table disabled a couple of hours before the big hand is dealt.

Why? Well, the two lucky winners from the 70 billionth hand promotion were found to have ‘fast-folded’ as the landmark hand approached to give themselves a better chance of succeeding.

It worked, of course, but PokerStars are determined to remove such an opportunity this time to make natural play the deciding factor in success.