Juan Maceiras Lapido and JP Kelly have surprisingly been dropped from the Team PokerStars line-up. 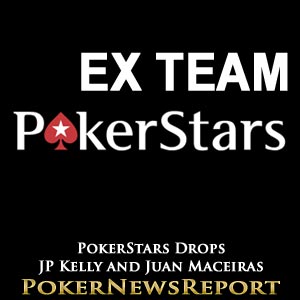 Juan Maceiras Lapido and JP Kelly have surprisingly been dropped from the Team PokerStars line-up.

Both pros’ player pages are no longer available on the PokerStars website, while their names have also been deleted on the Team PokerStars list of players.

Kelly, who ultimately finished in 26th place to take home $302,000, joined up with Team PokerStars after his double success of 2009 and has since become established as among the most promising poker stars from the UK.

Juan Maceiras Lapido, meanwhile, became part of Team PokerStars two years back, making him the first the Spaniard to make the roster.

He sits in third place on Spain’s overall winnings list with over $1.1 million in career earnings to sit behind Carlos Mortensen and Raul Paez Corral.

While Lapido and Kelly have been dropped by PokerStars, there was better news for Englishman Jake Cody, who has become the latest member of Team PKR.

The youngest of four Triple Crown winners, Cody will now represent [geolink href=”https://www.pokernewsreport.com/pkr-poker”]PKR Poker[/geolink] at events across the globe, as well as on the site itself.

The 23-year-old from Rochdale collected $851,192 for winning this summer’s event #2, the $25,000 buy-in Heads Up No-Limit Hold’em Championship (256 max), at the WSOP and has also enjoyed great success on the European Poker Tour (EPT) and World Poker Tour (WPT).

In doing so, Cody – who won €150,000 for finishing seventh at the recent WSOPE main event – has established himself as one of the most capable tournament pros in the world and at the same time joined an exclusive club of Triple Crown winners alongside Bertrand Grospellier, Roland de Wolfe and Gavin Griffin.

Cody, who remarkably deposited a mere $10 online as the start of his poker career, has of course turned that minimum outlay into a substantial fortune.

He is certainly thrilled to be joining PKR and said:

I’m very excited about joining Team PKR Pro. I’ve been patient with sponsorship, waiting for the right deal to come along.

When I spoke to PKR, I was really impressed with the whole set-up and the ideas that they have going forward, and I knew straight away I wanted to be part of it.

Cody’s addition to Team PKR will undoubtedly add credibility to the now seven-strong line-up of young stars, as he now joins Londoner Shelley, who picked up £133,857 for winning the 2010 WSOPE event #3, a £1,075 buy-in No Limit Hold’em tournament.