PokerStars Communications Chief yesterday failed to quash rumors that talks between the DoJ and PokerStars over the future of Full Tilt Poker had stalled. 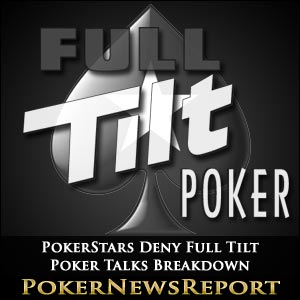 PokerStars Communications Chief yesterday failed to quash rumors that talks between the DoJ and PokerStars over the future of Full Tilt Poker had stalled.

A rumor developed yesterday (Wednesday) that PokerStars had pulled out of negotiations with the US Department of Justice (DoJ) over their proposed takeover of Full Tilt Poker. The rumour had developed from speculation surrounding PokerStars decision to file motions to dismiss the charges made against the company in the Black Friday indictments.

The motions to dismiss was interpreted by some as the final straw for PokerStars owner Isai Scheinberg – who is still officially a fugitive in the USA after being personally named in the charges against PokerStars and who allegedly pulled out of negotiations with the DoJ when the federal agency failed to drop civil charges against him.

The Rumor of a Breakdown in Talks Develops

Claims of the talks regarding Full Tilt Poker´s future breaking down were first aired on Twitter by James Barnes – a London-based former legal counsel for Party Gaming who is regarded as a fairly reliable source. Barnes tweeted:-

His tweet was quickly picked up by online poker forums who wanted more information and sources. Barnes obliged in part with two further tweets:-

DOJ have rejected proposal by Isai to have civil charges dropped. He’s worried about jail time. Pokerstars have gone all-in! Will DoJ fold?

@_tizzle I’m afraid I can’t divulge source or go into detail, but I stand behind it. And TBH not entirely surprising! #FTP #PokerStars

Denials Fail to Convince the Public

As the rumors developed, several tweets were published counter-claiming that the rumor was false. The most publicly commented on tweet was by Andrew Feldman – host of ESPN ´s Poker Edge – who wrote

The editor-in-chief of PokerNews – Elaine Chaivarlis – tweeted from Las Vegas PokerStars’ @erichollreiser told me a bit ago that there are many false tweets out there in regard to PokerStars and FTP and although PokerNews´ Matthew Parvis also joined in the third-party denials, the lack of an announcement directly from Eric Hollreiser himself – despite being online at the time – added more fuel to the speculation.

By early this morning, Twitter was once more alive with speculation that PokerStars were no longer pursuing an agreement with the US Department of Justice and whereas Eric Hollreiser had been quick to make a public announcement – albeit limited – when rumors first broke about PokerStars taking over Full Tilt Poker, his silence on this occasion has been deafening.

Many of the comments concerning the PokerStars/Full Tilt Poker situation have typically condemned PokerStars for not being more forthcoming about the situation.

@erichollreiser you sure could clear up a big mess by being more open and forward. Be the great company you are and make an announcement.

@AFeldmanESPN @erichollreiser Maybe I’m too jaded from politics, but denying a rumor doesn’t make the opposite true. #Spin

Maybe the question that should be asked is why the PokerStars Head of Communications is failing to communicate?