Caesars Entertainment offered to sell its WSOP brand and the Rio Casino in Las Vegas to PokerStars last month, but the world’s top poker site declined. 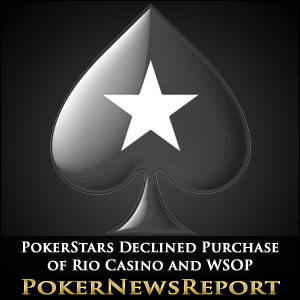 Caesars Entertainment offered to sell its WSOP brand and the Rio Casino in Las Vegas to PokerStars last month, but the world’s top poker site declined.

PokerStars is currently embroiled in controversy after the American Gaming Association (AGA) filed a brief with the New Jersey Division of Gaming Enforcement hoping to keep the company from purchasing an Atlantic City casino and entering the new online gambling market in the Garden State. Caesars happens to be a prominent member of the AGA.

Nevada’s recent statute that calls for interstate online poker compacts also includes a provision that prohibits companies who serviced the U.S. online poker market after enactment of the UIGEA in 2006 from participating in the state’s Internet poker scheme for a period of five years. That would include PokerStars, who rose to the top of the marketplace in part because of remaining in the U.S. while sites such as PartyPoker obeyed the UIGEA and departed.

Caesars apparently suggested to PokerStars that acquiring a Las Vegas casino would help the company in acquiring an online poker license in the Silver State, PokerStars’ Head of Corporate Communications Eric Hollreiser told Forbes. There has been some speculation that Caesars intent may not have been to actually sell the casino to PokerStars, but instead to force the Rational Group, parent company of both PokerStars and Full Tilt, to undergo scrutiny from Nevada gaming officials.

But since PokerStars chose not to engage in negotiations to purchase the Las Vegas casino, it will now be up to the New Jersey Casino Control Commission to determine if PokerStars will be a suitable owner of the Atlantic Club casino and be allowed to enter the state’s online gambling market.

PokerStars argues that the U.S. Department of Justice found them suitable to acquire the assets of Full Tilt and to also apply for a U.S. online poker license on either the state or federal level. PokerStars admitted no wrongdoing or guilt in the deal. Had they been required to apply for an online poker license in Nevada, they most certainly would have to prove that no laws were actually broken when they flouted the UIGEA and continued to operate in the U.S. PokerStars may not have to prove as much in New Jersey, where the state has seemingly welcomed them with open arms to help in the recovery of the Garden State’s struggling Atlantic City casinos.