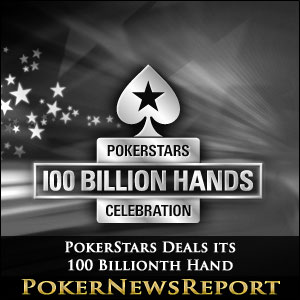 After weeks of heightened anticipation, the wait is finally over. [geolink href=”https://www.pokernewsreport.com/pokerstars”]PokerStars[/geolink] has dealt its 100 billionth hand. The winner of the biggest hand in online poker history was Microulis69, who judging by his name has never won a pot worth four figures before, let alone six.

The historic hand, which guaranteed at least $100k to the winner, ended up making the Greek player $103.8k richer. But Microulis69 didn’t win without a serious sweat. Holding J-5 of diamonds, Microulis69, like everyone else at the table, shipped his entire stack into the middle, hoping that the poker gods were on his side. The flop came A-2-J all clubs, giving him the best hand with middle pair. However, three players held overs to his Jack, while Mayers666 held the 7 of clubs. The action was halted, and in the short time before the next card was dealt, a slew of Team PokerStars pros joined the rail, along with a host of other players.

In true poker fashion, the turn and river bricked and Microulis69 was declared the winner. Oh, and just for good measure he also raked in the $31.55 pot. The hand was played at a $.02/.05 table. At the time, over 100 players were waiting on line for a seat. The other players at the table were rewarded approximately $13k each just for being there, and every one else sitting at a $.02/.05 table received a small portion of the $1 million dollar prize pool. In total, 9,471 players were paid an average of $84.72 each. Not bad, but nowhere near what they would have received for winning.

The promotion, which began a week and 300 million hands ago, paid out over $2 million dollars in total. On its blog, PokerStars reminded players that just because the 100 billionth hand hit, doesn’t mean the party’s over. On Sunday, the site will attempt to break the online tournament record for entries by hosting a $300k guarantee. The entry fee – one dollar. It will also begin a $1 million Golden Sit & Go promotion on June 17th.

At the time of the 100 billionth hand a staggering 384,000 players were online, and not a single one of them held residence in the United States. Hopefully folks from the States will be able to participate in the fun when PokerStars deals its 200 billionth hand. Judging by the site’s popularity, it shouldn’t take too long.