PokerStars’ bid to purchase the Atlantic Club casino may be in jeopardy following the expiration of time in which the company was allowed to secure licensing. 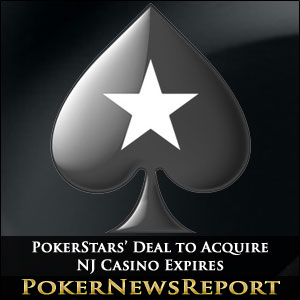 PokerStars’ bid to purchase the Atlantic Club casino may be in jeopardy following the expiration of time in which the company was allowed to secure licensing.

The agreement between the Rational Group, parent company of PokerStars, and Colony Capital, the Atlantic Club’s owner, included a stipulation that a casino license be secured by April 26 in order for the deal to move forward. That day has come and gone with apparently no new agreement in place, throwing another wrench into PokerStars’ plans to enter the U.S. online gaming market, the Wall Street Journal reported.

The companies began negotiations for PokerStars to purchase the financially struggling Atlantic City casino in December. It was announced that an agreement was reached, with the purchase price somewhere in the ballpark of $50 million. PokerStars then applied for casino license authorization with New Jersey gaming regulators in January. However, their application was deemed incomplete and it wasn’t until April 10 that the state’s Division of Gaming Enforcement (DGE) ruled that all necessary paperwork had been filed.

That began the clock ticking on a 90-day period in which the DGE has to investigate potential licensees and report its findings to the New Jersey Casino Control Commission. The commission then has another 30 days to make a final decision. That would allow the ultimate decision to be made in early August. But those timetables may be moot if the current deal is no longer valid due to the expiration date contained in the agreement.

PokerStars was hoping to forge its way into the U.S. online poker marketplace through its purchase of the Atlantic Club in the Garden State, as legislation passed in February was done without any bad actor clauses attached. Nevada, which kicked off its online poker scheme yesterday when Ultimate Poker began accepting the country’s first legal real-money wagers, included bad actor provisions in its regulations.

In March, the American Gaming Association (AGA) strongly opposed PokerStars’ desire to purchase the casino, citing the company’s flouting of 2006’s UIGEA and continuing to operate in the U.S. market. New Jersey gaming regulators have still not announced if the AGA petition would be considered in deciding PokerStars’ suitability for licensing.

However, with the agreement between Colony Capital and Rational Group having expired, there is rampant speculation that Colony Capital may now entertain other bids for the Atlantic Club. That could seriously jeopardize PokerStars’ attempt to gain a piece of the online poker market in the U.S. PokerStars currently dominates the worldwide marketplace and is ranked as the top Internet site by a wide margin, with sister site Full Tilt Poker right behind in second place.

Considering the tone and anger in which the AGA derided PokerStars in its petition, stating that the company used deception and chicanery in building its customer base, it would not be surprising if the AGA urged other casino companies to bid on the Atlantic Club. PokerNewsReport will keep readers apprised of all the latest details in this developing story.