PokerStars has frozen the accounts of many U.S. poker players logging on to the site and playing from within U.S. borders while attempting to mask their true location by using a Virtual Private Network (VPN). 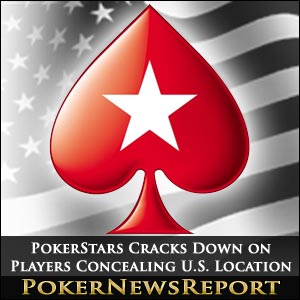 PokerStars has frozen the accounts of many U.S. poker players logging on to the site and playing from within U.S. borders while attempting to mask their true location by using a Virtual Private Network (VPN).

A number of players have recently reported that their PokerStars accounts have been shutdown while playing on the world’s largest poker site from within the United States. One particular player stated that PokerStars informed him that his account would remain suspended pending further legal review.

It is impossible to log on to PokerStars directly from the U.S. for real money play. By using a VPN, a player’s internet connection is rerouted through a server that is hosted in a country that permits poker play, effectively showing that the player’s IP address is not located in the U.S., thus concealing the actual location of the player’s computer. PokerStars firmly prohibits using VPNs to mask geographical locations.

Although it is difficult to technically detect a VPN connection, if a player gets temporarily disconnected from the existing VPN tunnel, their actual geographical location can be revealed. Apparently, such discrepancies in internet connections have been monitored by PokerStars, resulting in the suspension of accounts found to be in violation. It is not yet known what final action PokerStars will take in regard to the locked accounts.

We are not really sure what will happen [to the suspended accounts] yet, said PokerStars’ VIP Manager Steve Day. The accounts get frozen, and then we wait for guidance from the independent moderator who was appointed by the Department of Justice what to do with the funds in these accounts and what to do with the accounts in the future.

Since PokerStars shutdown service to U.S. players following the legal charges filed on Black Friday, the poker site has been steadfast in adhering to the Department of Justice mandate prohibiting poker players in the U.S.from accessing the website. In the FAQ section of the poker site, PokerStars answers the question of whether VPN usage is allowed:

Real money play is not allowed from within the US under any circumstances. Players who attempt to play for real money from inside the US with the aid of VPNs or other technical workarounds will lose their playing privileges and/or funds in their account.

PokerStars is well aware that many U.S. players are still attempting to play on the site and warns players not to listen to those who think that they can get away with circumventing their true location. People realize now we are enforcing this, Day said. We don’t always catch every single person on the first try … so people hear anecdotes from their friends, ‘oh I did it, I didn’t immediately get … banned from the site. So obviously it’s okay for you to [play from within the US] too.’

It is believed that there are a number of individuals or companies who have contacted U.S. players via email and offered a “virtual relocation package” to players wishing to continue to play, albeit illegally, from within U.S. borders. The following is the text of one such email received by a U.S. player in May:

A lot of people have been asking me about playing poker from the US so I wanted to pass on this info to you. The package detailed below is being offered by some very trusted friends in the gaming industry. I can tell you this is completely legit. If you are interested, you can email them below or they can call you with more information.

The recent developments in online poker have left many poker players without a source of income and exploring the possibility of moving outside of the United States in order to continue playing. While this idea is intriguing, let us assure you, it is much harder than it sounds. Ridiculously expensive services are now popping up offering players the ability to play in the United States through VPN, but these are far from safe and do not address many of the things you will need to actually play and withdraw your money.

We are offering a complete virtual relocation package built by industry insiders and technical experts. We can guarantee you a 100% safe and undetectable solution to start playing poker again, without ever having to leave your own home.  We can provide you with the following solutions:

We are offering a full virtual relocation for a reasonable onetime fee, and a low monthly maintenance fee.  The service takes a short amount of time to set up on our end, and takes very little effort on your end.

We are also implementing a high reward referral system. If any player you refer signs up to the service you will receive a substantial referral payment.

We understand there are a lot of questions that come to mind when considering using a service like this, and we have answers to all of them.  To request a more detailed explanation of what our service includes, please contact us at xxxxx@xxxxxxxxxxxx.com

Steve Day had one final word for players who are using VPNs or who might want to try. Tell all your friends, it’s a mistake to try to do this, Day said. Many people are getting caught, and the consequences are severe. We have to enforce the rules.

One Reply to “PokerStars Cracks Down on Players Concealing U.S. Location”