The schedule for the Spring Championship of Online Poker and the prizes up for grabs in the leaderboard competition have just been confirmed by PokerStars. 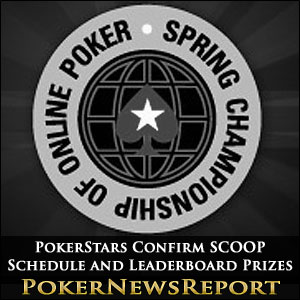 The schedule for the Spring Championship of Online Poker and the prizes up for grabs in the leaderboard competition have just been confirmed by PokerStars.

This year´s $40 million guaranteed Spring Championship of Online Poker (SCOOP) will be hosted on PokerStars from Sunday May 12th to Sunday May 27th and feature forty-four different tournaments – each having a low, medium and high buy-in.

The series starts with three consecutive 6-Max NL Hold´em events at 11.00am server time (buy-ins $27.00, $215.00 and $2,100.00) with a combined guaranteed prize pool of $1.9 million and, within the comprehensive schedule over the following two weeks, PokerStars have included SCOOP events for the recently introduced games of 5 Card Omaha and Courchevel and – for the first time ever – a Zoom Poker tournament.

The series concludes on the 27th May with a Triple Chance Turbo “Wrap-up” which starts just hours after the SCOOP Main Event kicks off; which, between the three buy-in levels of $109, $1,050 and $10,300, has a combined guarantee of $6,000,000! Satellites have just started for the Main Event on PokerStars if a buy-in of $10,300 is a little beyond your bankroll.

PCA, Monte Carlo and WCOOP Packages Up For Grabs!

This year´s SCOOP Leaderboard competition also offers some valuable prizes. Divided into three sections in relation to the low, medium and high buy-ins for each event, each section winner will receive a SCOOP trophy and a package to the PokerStars Caribbean Adventure 2014. The runners up in each leaderboard category will win MicroMillions tickets or WCOOP Main Event entries depending on where they finish within their section.

In addition to the sectional leaderboard prizes, the overall SCOOP Player of the Series will win a Monte-Carlo®Casino EPT9 Grand Final Package – which we are guessing must be for Season 10, because this year´s Monte Carlo Grand Final EPT9 finishes the same day as the SCOOP starts! (It is not often you catch PokerStars out like that!)

Between 10 points and 100 points are awarded for the leaderboard competition depending on a player´s finishing (cashing) position in each tournament, irrespective of the value of the buy-in. Last year´s overall winner, Shaun Deeb, won the Player of the Series with 860 points after playing in 115 SCOOP events; and that is the commitment that this year´s winner will need to capture such a prestigious title.

The full schedule for the PokerStars Spring Championship of Online Poker and the terms and conditions for the SCOOP Player of the Series competition are available on the PokerStars web site now.