Just as the first leg of the European Poker Tour reaches a climax in Barcelona, PokerStars have made changes to the dates on the rest of the tour. 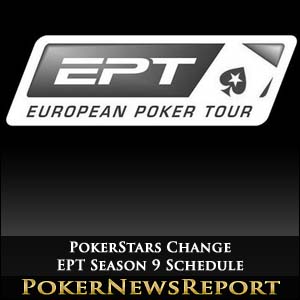 Just as the first leg of the European Poker Tour reaches a climax in Barcelona, PokerStars have made changes to the dates on the rest of the tour.

The bubble may have burst for 160 lucky players in the EPT Barcelona Main Event, but there is plenty more poker to be played on the European Poker Tour throughout Season 9. To make things more exciting as the season reaches its climax in Monte Carlo, the dates for the penultimate leg of the EPT Season 9 (EPT Berlin) have been brought forward to create a four week European Pokerfest!

Originally scheduled to be hosted the week before the EPT Grand Final in Monte Carlo, the EPT Berlin is now going to be held at the Grand Hyatt in Berlin between  April 17th and 27th (with the Main Event starting on April 21st) in order to allow players the opportunity to acclimatise to the Mediterranean climate (something that Justin Bonomo should have done this week in Barcelona!) at the IPT in San Remo from 28th April to 7th May before heading off to Monte Carlo for the EPT Grand Final which starts on the 6th May.

With the EPT Monte Carlo not concluding until the 15th May, the three events combined will provide four weeks of opportunities for poker players throughout Europe to flex their muscles prior to the International Stadiums Tour in Wembley  (stop laughing at the back!) and then the annual jamboree to Las Vegas for another month.

The London Hilton Metropole has been dumped as a venue for the EPT London in March 2013 and replaced by the Landmark Hotel in the Marylebone Road. Still within staggering distance of the Vic  – which will continue to co-host the EPT London side events – the Landmark Hotel is an old “Grand Station Hotel” which was built to serve passengers travelling to and from Marylebone station until train fares in the UK became too expensive for ordinary people (around 1920 – seriously!).

The hotel fell out of use for forty years around the two World Wars – when it was used as a convalescence home for injured soldiers – and it was taken over by the British Railways Board, who used it to hide it while the railways in the UK crumbled into disrepair. Eventually the hotel was re-opened as The Regent Hotel in 1993 and then sold to the Landmark Group in 1995.

Apparently Manchester United use the hotel as its London base when playing in London and as Manchester United have a game against West Ham on March 6th (three days after the EPT London begins) – you can expect Sam Trickett to be in attendance along with many other of his sporting chums.

For those who cannot wait until March for their live poker thrill, PokerStars are hosting their first VIP Club Live Event at the London Film Museum (right next to the London Eye). The event starts at the un-earthly hour of 10.00am on Saturday 29th September, but includes a tour of the museum, brunch and a free bar throughout a screening on the Arsenal v Chelsea match at 12.45. For those not interested in football, there will be plenty of other activities in place including a chance to win one of three packages to a UKIPT Main Event.

Entry is limited to PokerStars VIP members on a first-come, first-served basis and tickets can be purchased for the event from the PokerStars store using VPPs. The value of VPPs required to get your hands on a ticket is dependent on your VIP Status, so check out the PokerStars VIP Club site for more information and how to take advantage of a great day out in London courtesy of PokerStars.