Ilari Sahamies has overtaken Rafi “refaelamit” Amit as PokerStars cash leader with a profit of $2,241,134 so far in 2011 with about 5 weeks left to go. 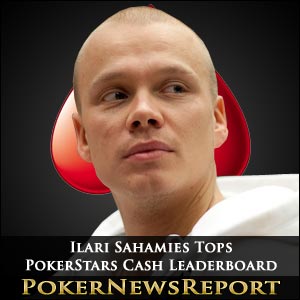 Ilari “Ilari_FIN” Sahamies has overtaken Rafi “refaelamit” Amit as PokerStars cash leader with a profit of $2,241,134 so far in 2011 with about five weeks left to go.

The 27-year-old pro from Finland has enjoyed an incredible run as of late and his position atop the leaderboard is even more amazing considering that just five months ago he was down $873,000 for the year on the world’s largest poker site before reversing his fortunes with an upswing of $3 million.

Recently, Sahamies has excelled at $200/$400 Pot Limit Omaha 6-Max cash games at PokerStars, which recently returned to the site. In Tuesday evening’s action, Sahamies found seats available at two tables at that level and game type alongside players such as Vaga_Lion, GARFIELD25, 1-ronnyr3 and Jens “Jeans89” Kyllonen.

Despite dropping $120,000 at one of the tables, Sahamies pocketed $535,373 on the other finishing his night’s work with a profit of $426k. He even took down the largest pot of the evening, a $266k stunner against Peter “GARFIELD25″ Chen, who ended his session in the hole a staggering total of $537k.

Tuesday’s winnings allowed Sahamies to move ahead of the Israeli prodigy Amit, who had been on top of the cash profit leaderboard for the last several months with about $1.8 million in winnings. Amit began playing at PokerStars only in January, but has proven to be one of the site’s most formidable foes.

Also enjoying a good run at the high-stakes Pot Limit Omaha tables recently has been a mystery player with the screen name of “Fake Love888,” who many suspect to be poker pro Patrik Antonius.