PokerStars is approaching its 900 millionth tournament and – in order to celebrate the milestone – has announced a series of exciting carnival promotions. 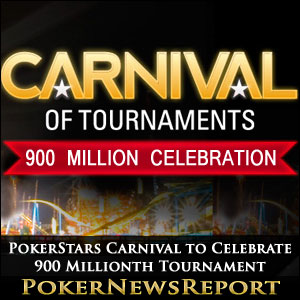 PokerStars is approaching its 900 millionth tournament and – in order to celebrate the milestone – has announced a series of exciting carnival promotions.

Incredible as it may seem, it was only last October that PokerStars was celebrating its 800 millionth tournament with a huge carnival promotion that gave away $100,000´s in cash prizes and tournament entries.

It took the world´s largest online poker site twelve years to reach that milestone, but – six months later – PokerStars has announced a series of promotions to celebrate its 900 millionth tournament; which include “Milestone” Golden Sit n Gos, Big, Bigger and Biggest tourneys, and a $1 million guaranteed event when the tournament count reaches 900,000,000.

The Milestone Golden Sit n Gos start today with an extra $500,000 of value allocated by PokerStars to randomly reward sit n go players. However, unlike previous Golden Sit n Gos, the prizes in the Milestone 900 millionth tournament carnival promotion are bigger and better than ever before:

If your sit n go table turns gold and it is announced that you are sitting at a “Big” Golden Sit n Go table, your buy-in will be refunded and all the prizes for the tournament will be doubled.

Players seated at a “Bigger” Sit n Go table will be rewarded with double their buy-in returned to their accounts plus the total prize pool will be tripled, while those lucky enough to enter a “Biggest” Golden Sit n Go will win five times their buy-ins plus be playing for six times the original prize money.

Starting from April 21st (Easter Monday) the Daily “Bigs” will get a $2 million dollar boost in guaranteed prize pools plus dish out more than $100,000 in random tickets to future tournaments.

From Monday to Friday, the guaranteed prize pool for each of the Daily “Big” tournaments will be increased by 50 percent, on Saturday 26th April they will have their normal guarantees doubled and on Sunday 27th the prize pools will be tripled.

Furthermore, players seated at randomly chosen tables will be awarded tournament tickets equivalent to the buy-in for the “Big” tournament they are currently playing in. So, if you are among the lucky 126 players selected playing in the 14:00 (ET) “Big $11.00” event each day, you will win a free tournament ticket to the value of $11.00.

Tournament #900,000,000 is scheduled to be played at 13:00 (ET) on Sunday 27th April and PokerStars are guaranteeing the prize pool at $1,000,000. The tournament will have a buy-in of $109.00 (hundreds of satellites are already under way for players with smaller bankrolls), and throughout the first two hours and twenty minutes of the tournament [geolink href=”https://www.pokernewsreport.com/pokerstars”]PokerStars[/geolink] will be giving away bonus prizes every ten minutes.

It looks like one big carnival is about to take place on PokerStars and it all starts today!