PokerStars Canada Cup Gets off to Satisfactory Start

There was a satisfying start to PokerStars Canada Cup Main Event yesterday, as 129 players ponied up the CA$3,300 buy-in for the CA$2 million guaranteed event. 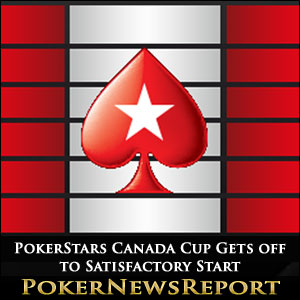 There was a satisfying start to PokerStars Canada Cup Main Event yesterday, as 129 players ponied up the CA$3,300 buy-in for the CA$2 million guaranteed event.

The PokerStars Canada Cup is a new tournament series being hosted at the Playground Poker Club in Montreal with twelve headline events being played over thirteen days. The highlights of the series are the CA$10,400 buy-in High Rollers event (which finished last night – details below) and the CA$2 million guaranteed Main Event, for which players have been qualifying for weeks on PokerStars.

The Main Event got underway yesterday with the first of three opening flights and, from the 129 players who took their seats at the Playground Poker Club, only 47 survived the ten one-hour levels. Those who failed to complete the day – or who survived with a relatively small chip stack – have the opportunity to re-enter the Main Event in either of the next two opening flights, with those who survive more than one Day 1 being allowed to carry forward their largest chip stack into Sunday´s Day 2.

Jeremy Thompson the Man to Catch

One player who will not have to consider re-entering is chip leader Jeremy Thompson. Thompson bagged up 260,000 chips at the end of the night to have a substantial chip advantage over Marco Caza (191,400 chips), with Marc Andre Ladouceur (174,400 chips) and WPT Alpha8 winner Steven Silverman (163,200 chips) leading the chasing pack.

It was not such a good day for Canada´s second most successful poker player – Jonathan Duhamel – who held the chip lead at the dinner break but who was bust out three hours later, or for the first and second placed finishers in the High Rollers tournament – Samuel Chartier and Ami Alibay – who both late registered into the Main Event, but who were both eliminated before the last level of the day.

Jason Duval was the bubble boy in seventh place when his A♣ J♦ failed to improve past Kevin MacDonald´s A♦ Q♠, and just three players returned yesterday to fight out the CA$122,050 first prize after Timothy Adams was bust in sixth place (A♠ 10♥ < David Yan´s A♦ K♠), Kevin MacDonald was sent to the rail in fifth place (K♦ 10♥ < Ami Alibay´s A♠ 10♣) and Jonathan Duhamel was eliminated in fourth place (8♦ 6♦ < Samuel Chartier´s A♠ Q♦).

Samuel Chartier entered the final day of the Canada Cup High Rollers with more than half the chips in play, but Ami Alibay knocked out David Yan in third place with a Six-high straight to practically level the chip counts going into the heads-up.

However, the climax to the Canada Cup High Rollers did not last long – Samuel Chartier moving all-in with A♦ Q♣ and Ami Alibay making the call with A♣ 9♦. The flop of Q♥ 8♥ 9♥ pair both players´ kickers, and the A♠ on the Turn gave both players two pairs. Alibay needed a Nine on the River to stay alive in the tournament, but the 3♦ bricked on the River, giving Samuel Chartier the Canada Cup High Rollers title and CA$122,050 first prize.