PokerStars have introduced a King of the Hill policy to prevent weaker players being preyed upon by more experienced ones in a practice known as ‘bum-hunting’. 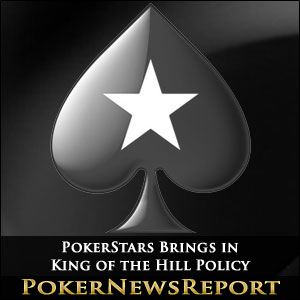 PokerStars have introduced a King of the Hill policy to prevent weaker players being preyed upon by more experienced ones in a practice known as ‘bum-hunting’.

Following changes to the PokerStars software, players who are sitting out at a table which is not dealing will be automatically removed after 30 seconds. As a result, the table will automatically close and be removed from the lobby. PokerStars´ representative Steve Day said The policy should remove a lot of frustration as well as ensure that weaker players are not preyed upon by sharks. If they lose their money it will be to the whole player community at those stakes, not just to those players who only play against weaker opponents.

Changes made to Selected Games and Stakes Only

The new policy only applies to 6-Max and Full Ring No Limit Hold´em, Flop Limit Hold´em and Pot Limit Omaha tables with blinds at $1.00/$2.00 and above. At the moment the changes will not apply to Heads Up tables or to the PokerStars sites in France, Italy and Spain.

The policy change follows the April PokerStars meeting between players and management that took place on the Isle of Man. These meetings had been scheduled on a regular basis so that PokerStars can “cut out the middle man” and management can hear directly from players rather than feedback being filtered through marketing and PR.

Definition of King of the Hill

Just in case you were wondering –

In King of the Hill, PokerStars restricts the number of tables with just 1 player sitting. If someone wants to play/hold a table after the limit is reached they must sit at one of the tables already occupied. Players sitting at a table must play anyone that sits down or they will be booted from the table. So players currently occupying a table are “Kings” and they must defend their hill (Table) or they will be removed and the challenger will be the new “King”.