It’s official – PokerStars last night held the world’s biggest ever poker tournament when 200,000 players signed up for the $1 event that guaranteed a $250,000 prize pool. 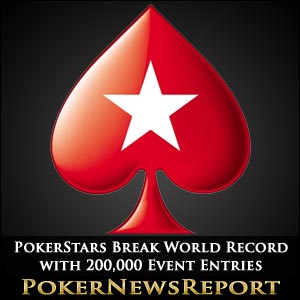 It’s official – PokerStars last night held the world’s biggest ever poker tournament when 200,000 players signed up for the $1 event that guaranteed a $250,000 prize pool.

Of course, I unsuccessfully attempted to sign up for the PokerStars 10th Anniversary World Record Tournament, but left it far too late and was then doubly disappointed to see a good friend crash out with about 40,000 players still left standing. Such is life, huh.

Ultimately, it appears PokerStars could have attracted far more than the capped field of 200,000 – and they may well up that record soon enough.

It took less than five minutes for over 6,000 entrants to bust out – and that was further reduced to fewer than 100,000 by the time one hour had been played. Just 20 minutes further on and the field was below 50,000.

After such a speedy start, play had to eventually slow down, and that is exactly what happened as the payouts jumped beyond the $100 mark.

Six hours in and the PokerStars 10th Anniversary World Record Tournament field was down to about 100 survivors.

However, once three-handed, the final players agreed a deal to chop up the prize money, before sokoluk1991 emerged triumphant – and much richer, too – after seven hours’ play.

If, like me, you missed out on this amazing event, don’t worry as there are many more grand giveaways running at PokerStars as they celebrate their 10th anniversary.