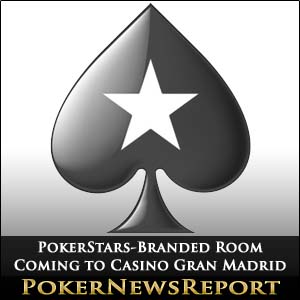 Online poker giant, PokerStars, has signed an agreement with Casino Gran Madrid that will allow them to offer the poker company’s games at their casino. More than twenty poker tables will be available to customers in the branded room.

The new room is under construction with plans for it to be completed by early next year. It plans to host regular events on a monthly and quarterly basis, as well as a steady offering of live tournaments with a range of different buy-ins.

Casino Gran Madrid is the premier casino destination in Madrid, which we already work with to host some of the largest and most successful poker tournaments in Spain, commented Guy Templer, Head of Business Development for PokerStars.

Establishing a permanent PokerStars-branded poker room in the casino will give more players the opportunity to play world-class poker with the high quality player experience that PokerStars is known for.

The new room expects to host more than 20,000 players annually on-site and via their online website, PokerStars.es. The on-site room will be able to accommodate 200 players at one time. The two companies are planning the possibility of hosting exclusive high-roller events, professional and celebrity tournaments and educational seminars.

This extra dimension will catch the interest of all national and international players. Our ambition is to create an amazing atmosphere to play poker, adapting the lighting, the seats and the audiovisual support to the needs of the poker player.

PokerStars is currently signing deals with land-based casinos and this one in Spain is the second such deal it has established. This deal is similar to one announced by PokerStars earlier in the year which saw them sign an agreement with the Hippodrome Casino in London’s West End. That poker room is also under construction with plans for it to open early next year. Casino Gran Madrid is one of the biggest land-based casinos in Spain and this deal will give PokerStars a firm footing in the casino industry in the country.