The timetable on a decision on whether PokerStars will be allowed to acquire an Atlantic City casino is now in place following completion of its application. 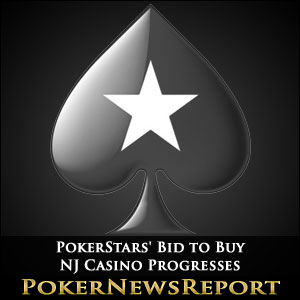 The timetable on a decision on whether PokerStars will be allowed to acquire an Atlantic City casino is now in place following completion of its application.

PokerStars’ parent company, the Rational Group, submitted a bid four months ago to purchase the financially struggling Atlantic Club Hotel and Casino for a reported £30 million. The New Jersey Division of Gaming Enforcement (DGE) found PokerStars’ application to be lacking the required information and instructed company officials to submt a completed application.

The DGE has announced that the application is now fully complete as of April 10, which marks the beginning of a 90-day period of investigation, the Press of Atlantic City reported. New Jersey gaming regulators are allowed until July 9 to investigate PokerStars and file a report of their findings with the New Jersey Casino Control Commission. The commission, in turn, has 30 days in which to hold a hearing on the matter and make its final decision.

PokerStars is hoping to acquire the casino as a means to enter a regulated U.S. online poker market that is expected to kick off sometime this year. Thus far, New Jersey, Nevada and Delaware have enacted various forms of online gambling legislation, with other states expected to follow suit in the future. PokerStars has also applied to take part in Delaware’s online poker regime. A bad actor clause in Nevada’s regulations will likely prevent the world’s top site from entering the market in the Silver State unless they choose to challenge their bad actor status in court.

The American Gaming Association (AGA) has vehemently opposed PokerStars’ bid to purchase the casino, citing the company’s failure to exit the U.S. marketplace following passage of the UIGEA in 2006. PokerStars responded to the opposition by saying that the AGA’s petition should not even be afforded consideration by New Jersey gaming officials, as its merely an attempt to prevent competition in the marketplace.

The commission had scheduled the consideration of the AGA’s petition at a mid-March meeting, but took the issue off the agenda in order to give officials more time to mull over its merits.

PokerStars will know sometime in early August if their application for casino licensure has been approved in the Garden State. Should that happen, it wouldn’t be shocking to see the AGA perhaps attempt to intervene in a court of law.