The United States Department of Justice (DoJ) has agreed to release funds from one of the PokerStars bank accounts frozen on Black Friday. 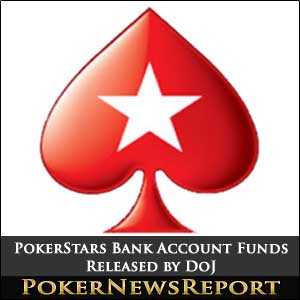 The United States Department of Justice (DoJ) has agreed to release funds from one of the PokerStars bank accounts frozen on Black Friday.

The news was announced in a “Stipulation and Order” document filed with the United States District Court of the Southern District of New York last weekend and enables PokerStars to access monies held in an account at the Bank Hapoalim (Suisse) SA in Luxembourg in the name of Sphene International – one of PokerStars´ payment processors.

Under the terms of the release, PokerStars is to maintain an account balance of $5.5 million – this sum being calculated as funds earned from PokerStars´ customers in the United States. It is not publicly known what the total amount now available to PokerStars will be, and the unfrozen account is only one of many held in the name of Sphene International in Luxembourg. Nonetheless, it is a step in the right direction for PokerStars who have still to deal with the pending Federal legal action against the company.

How the Good News for PokerStars was Worded

The official wording of the document enabling PokerStars to access its previously frozen funds was “WHEREAS, the Government and PokerStars have reached an agreement pursuant to which PokerStars consents to the restraint of $5.5 million in the Account for the pendency of the above captioned case, and the Government agrees that it does not object to PokerStars’ use of the remaining funds in that account”. The agreement is expected to remain in place until the Federal legal action is resolved.

The Start of the Big Thaw?

Whether this release of funds is the start of a much bigger unfreezing of assets seized by the Department of Justice on April 15th remains to be seen. However, since the indictments against poker websites like PokerStars, Full Tilt Poker and UB/Absolute Poker were first issued; PokerStars has been fully cooperative with the DoJ and has diligently refunded all of its American players – unlike Full Tilt Poker, who have yet to repay a cent to any of its millions of players worldwide.

Still the Biggest Poker Site in the World

Despite losing its American client base, PokerStars remains the biggest online poker site in the world – regularly attracting six times as many cash players as its nearest rival. Currently hosting its “World Championship of Online Poker”, PokerStars also sponsors many live poker events including the UK and Ireland Poker Tour which arrived in Dublin last night and the European Poker Tour which makes its next scheduled stop in London from September 30th.