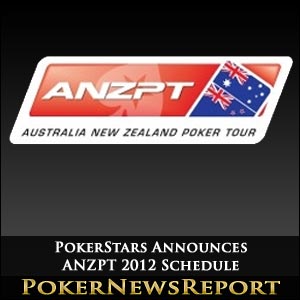 The PokerStars Australia New Zealand Poker Tour (ANZPT) schedule for season four has been announced. Season IV will begin in Sydney, Australia, with the March 22 to 25 stop hosting a AUD$2,200 buy-in main event at The Star Casino that has been capped at a maximum of 500 entrants.

The tour, which has just four stops so far, also takes in Queenstown’s SKYCITY for the ANZPT Snowfest from July 24 to 29, when a NZD$3,000 buy-in main event will be staged, although that particular tournament has been given a 200-entrant cap.

Sandwiched between those two events is an as-yet-unnamed stop in June that will feature a AUD$2,200 buy-in main tournament, while the tour comes to a conclusion with the ANZPT Melbourne Grand Final at the Crown Casino from August 31 to September 3 and which will possess a AUD$5,000 buy-in main event – and once more a 500-player maximum field.

Season III, which included eights stops, was a particularly successful one for the ANZPT, which witnessed a record 1,746 players in total enter the tour’s events last year to create a prize pool of AUD$3,692,040.

The third staging of the ANZPT also saw several players make their presence felt in the wider world of poker after taking down some significant events, including home player Octavian Voegele’s Adelaide success that won the Obsteg native $147,642 after he outlasted 252 other starters last February.

The second player to make a big impact was Sydney’s Grant Levy, who saw off 219 other players to pick up $130,175 for winning the ANZPT Perth in March.

Lastly, there was 2006 Aussie Millions champion Lee Nelson’s success in Melbourne, which saw him see off 309 players to pick up $160,551 for his triumph in last September last year.

Certainly, every entrant for this year’s tour will be hoping to follow in the footsteps of that triumphant trio when the ANZPT kicks off on Thursday, March 22, in Sydney.