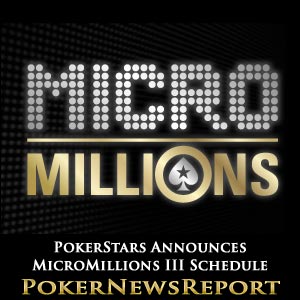 This will be the third installment of the popular low-budget online poker festival and is guaranteeing $5 million in prize pools with buy-ins ranging from as little as 11 cents up to $22. For those who are on an even tighter budget, there are qualifying satellites for each scheduled event in the MicroMillions. Tournaments will be running around the clock throughout the entire 11-day series and conclude with the $22 MicroMillions Main Event on Nov. 25, featuring a guaranteed $1 million prize pool and $150,000 to the winner.

Players can choose between their favorites among rebuys, turbos, knockouts, shootouts and large ante formats. MicroMillions II was held in July and followed the success of MicroMillions I in March of this year. The low-stakes events have proven to be extremely popular among both grinders and recreational players. In July, more than 1.2 million entries allowed prize pools to balloon to nearly $8 million.

For those grinders who don’t like to miss any action and can somehow stay awake for the entire 11-day series, entering each tournament would require a bankroll of only $382.18. Although actually attempting such a feat would result in some serious sleep deprivation that would affect any player’s decision-making, team PokerStars Pro Marcin Horecki played in 89 of the 100 events in MicroMillions I, cashing in 34 of the tourneys. His remarkable run enabled Horecki to win the MicroMillions Player of the Series award that included a 2013 PokerStars Caribbean Adventure package. Interestingly enough, Horecki took first place over GMalex89 by only 10 points, so he needed all 34 in-the-money finishes to win the award and the PCA freebie.

Speaking of the PCA, 2013 will mark the 10-year anniversary of poker in the Bahamas. PokerStars is offering 10 guaranteed prize packages for the event each week until Dec. 9 for only $10. That’s 100 packages available for 10 glorious days of poker and fun in the sun.