PokerStars has announced the MicroMillions Schedule, with a guaranteed prize pool of $5 Million in cash prizes and two Zoom Poker tournaments. 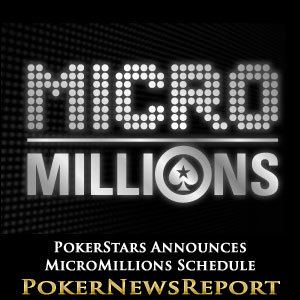 PokerStars has announced the MicroMillions Schedule, with a guaranteed prize pool of $5 Million in cash prizes and two Zoom Poker tournaments.

Start raiding the piggy bank and searching the couch for that loose change because something big is coming your way!

Starting March 14th, the 4th MicroMillions from PokerStars will begin. For as little as $.11, you can win your share of over $5million in guaranteed prizes. Along with tons of cash up for grabs, PokerStars is proud to announce this will be the first time the widely popular-Zoom Poker will be included in the tournament lineup.

The MicroMillions spans 10 days with 100 events, including 2- Zoom Poker tournaments. The final day of the series will feature a $22 Main Event with a cool million in guaranteed prize money. The previous winner of this event walked away with over $150,000!

Many of the events will be Texas Hold Em with buy ins ranging from as little as $.11 and up to $22-with something for everyone in between. Each event will feature a guaranteed prize pool that offers a massive return on your investment.

Fans of other poker formats will be happy to see a nice selection of other games with 15 non-Hold Em games on tap. The games include a couple Omaha and Stud events along with Badugi, 8-Game and Draw Poker.

If you are unfamiliar with Zoom Poker, it’s a fast paced version that allows players to instantly fold their hands and be whisked away to a new table in seconds. This allows for almost 3 times as many hands to be played versus a normal style poker game. The action is fast and the excitement is as good as it gets with Zoom Poker!

Players will also enjoy different formats that include-turbo, knockouts, super- turbo, re-buys heads up, ante up and plenty more. Let’s just say there will be no shortage of games to choose from. With small buy ins and tons of formats, everyone can join in the glory that is-MicroMillions IV.

Since the MicroMillions will overlap 2 of the Sunday Storm tournaments, PokerStars has added two-Sunday Storm Specials with $300,000 in guaranteed prizes for the same $11 buy in.

Player of the Series Award

If you think you’re the best, you can take your shot at bringing home the-“Player of the Series Award”. This prestigious award is given to the player who has the best record of the series. To the victor goes the spoils and the Player of the Series has enough spoils to keep you happy until Spring time.

The overall winner will receive a trophy, which is cool if you’re into invaluable, self-absorbing items. The real prize is the $5,200 entry into the Spring Championship of Online Poker Main Event. Along with an overall winner, over 100 additional prizes will be awarded to the best of the best.

To make this award even better is how points are accumulated. It doesn’t matter if your poor and can only play the $.11 buy ins, or semi-poor and play the $22 Main Event. Points are awarded in the same way, regardless of buy in.

The MicroMillions and PokerStars really know how to make everyone feel special and warm inside. This series of tournaments truly offers something for everyone. It should be an amazing 10 days and it all starts March 14th at 11 A.M. (EST). Mark the date on your calendar and get ready for some low stakes-high reward, poker fun.

Follow PokerNewsReport on Twitter to keep track of all the news and results surrounding the PokerStars MicroMillions.