With the relaunch of Full Tilt Poker set to commence by Nov. 6, PokerStars announced its plan to repay non-U.S. players per its agreement with the DoJ. 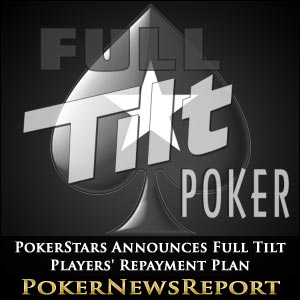 With the relaunch of Full Tilt Poker set to commence by Nov. 6, PokerStars announced its plan to repay non-U.S. players per its agreement with the DoJ.

Players in Italy will have to wait a bit longer for word on being reunited with their funds, as PokerStars is still discussing a repayment process that will comply with that country’s stringent regulations. All other non-U.S players will have immediate access to their Full Tilt account balances upon the relaunch. Those players can cashout, play on Full Tilt, or transfer funds to PokerStars and play or withdraw from that site. Although Full Tilt is owned by PokerStars, the sites will be run separately. However, the transfer of funds from Full Tilt to PokerStars and vice versa will be permitted.

A payment plan for U.S. players has yet to be announced and is not the responsibility of PokerStars. The early August agreement between PokerStars and the U.S. Department of Justice (DoJ) that allowed the top online poker site to acquire the assets of Full Tilt calls for the payment of $731 million within three years from PokerStars to the DoJ to complete the transaction–of which $184 million will go to rest-of-world players. PokerStars offered to also take on the burden of taking care of the remission process to U.S. players, but the DoJ chose to handle that responsibility. Their reason for doing so is not entirely clear, but rampant speculation is that the DoJ will take a cut–through various fees associated with repayment as well as requiring players to pay taxes to Uncle Sam on their winnings.

Each player’s legal residence is based upon the address on file at Full Tilt as of June 29, 2011. PokerStars recently sent out emails to non-U.S. players with account balances at Full Tilt above $3,500 in an effort to verify player identities and addresses. Players who received such emails must comply with the requirements in order to access their funds upon the relaunch date. U.S. players who may have relocated overseas since the Full Tilt shutdown last year will not be reunited with their funds as their addresses on file lists them as U.S. players. Those players, however, can play at the relaunched site after proof of residence documentation is submitted to Full Tilt and a deposit is made. It is expected that a claim for their account balances must be handled through the DoJ as U.S. players.