To celebrate being first to launch in the new French/Spanish shared liquidity market, PokerStars has announced a €5 million guaranteed FRESH tournament series for the end of the month. But that is only one of the promotions players in France and Spain can benefit from in the coming weeks. 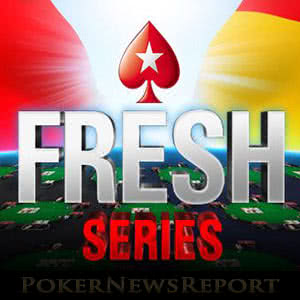 To celebrate being first to launch in the new French/Spanish shared liquidity market, PokerStars has announced a €5 million guaranteed FRESH tournament series for the end of the month. But that is only one of the promotions players in France and Spain can benefit from in the coming weeks.

Yesterday, PokerStars players in France and Spain met across the virtual felt for the first time since 2011. The result was incredible – particularly for cash game players in Spain, where for years the previous levels of traffic made it impossible to play more than two tables of NL Hold´em above €0.50/$1.00, play Zoom Poker above $0.10/$0.25, or play Omaha Hi/Lo at any stake level.

Tournament players also had a nice surprise, as the PokerStars tournament lobby had dozens more events than one would normally find on a Tuesday evening. Due to the doubling of the player pool, many of the tournaments doubled or trebled their guaranteed prize pools and – naturally – there was even less waiting around than usual for Sit & Go and Spin & Go games to start.

PokerStars Responds by Bumping Up Guarantees

Buoyed by the success of the first night of joint liquidity, PokerStars has announced massive increases to the guarantees for this week´s feature events. Tonight´s €250 buy-in “Super Jueves” tournament has seen its guarantee increase from €35,000 to €50,000, and the guarantee for Sunday´s €10 buy-in “El Classico” (now renamed to “The Classic”) has shot up from €25,000 to €100,000.

The biggest increase however has been saved for the €100 buy-in “Sunday Special”. The guarantee for PokerStars´ weekly feature event has been increased from €40,000 to €150,000 and, in order to encourage players to play in the tournament, the site is hosting around-the-clock satellites and mega-satellites starting at just €1 or 2,000 StarsCoin.

The news that PokerStars will be hosting a €5 million guaranteed “FRance ESpaña Hold´em” (FRESH) tournament series from January 28th to February 11th was widely circulated yesterday. Few news sites were able to access the tournament schedule, which is only accessible on the pokerstars.fr and pokerstars.es platforms and PokerStars´ .fr and .es websites. However we can reveal the following:

FRESH Series Supported by a Host of Promotions

In order to support the series, PokerStars is giving away thousands of Euros in free seats and satellite entries, plus a $30,000 Platinum Pass to the [geolink href=”https://www.pokernewsreport.com/pokerstars-announces-2019-players-nl-holdem-championship-22045″]PokerStars Players Championship (PSPC)[/geolink] next January. Freerolls offering €1,000 of free seats are running ten times a day across the French and Spanish platforms, and there is a special “Main Event Depositor Freeroll” on Sunday February 11th (two hours before the Main Event starts) for every player who reloads their accounts with €20 or more.

Players who bust out of any FRESH event before finishing in the money will be able to play in “Second Chance Freerolls” giving away €35,000 in tournament entries, and every player that competes in at least one FRESH tournament will receive an entry to a “PSPC All-In Shootout” on Tuesday February 13th, with a $30,000 PSPC Platinum Pass up for grabs for the winner. In total, PokerStars is pumping more than €100,000 into promoting the FRESH tournament series.

The incentives to play on the new shared liquidity platform are not exclusive to tournament players. With more action on the cash tables, players will be able to collect more chests each day in the Stars Rewards program, and the value of each chest is being increased to reflect this. PokerStars says the chests will now pay out more than €1.2 million per month in cash, StarsCoin and tournament dollars.

One of the biggest changes of all is a new random prize of €5,000 cash. Previously the top cash prize that could be won by opening a chest was €1,000, and only at Platinum level (which was very difficult to attain due to the lack of traffic at high stakes). Already, players in France and Spain have noticed more cash prizes and tournament dollars among their chest prizes than normal. A positive start for many.

A cynical observer might feel that PokerStars is taking advantage of its “first-to-launch” status by increasing its promotions in order to attract players from its leading French competitor – Winamax.fr (PokerStars has no viable competition in Spain). Winamax is unable to apply for a shared liquidity license at present as the site still accepts players from outside of France and is still to launch in Spain.

If Winamax was to obtain a shared liquidity license, the competition may prompt PokerStars into bigger and better promotions. However, it has been speculated Winamax [geolink href=”https://www.pokernewsreport.com/spain-france-to-share-player-pools-in-the-coming-weeks-22091″]may be having second thoughts about shared liquidity[/geolink]. Without any competition, the fate of the new market could be solely in PokerStars´ hands – and there is a precedent for PokerStars screwing up before.

As was seen when Portugal first regulated online poker – where PokerStars is the only operator in the ring-fenced market – the initial wave of enthusiasm quickly declined as soon as the promotions stopped. Traffic on the PokerStars.pt platform is now a fraction of what it was immediately after regulation due to players returning to unregulated sites, where they can find more action, bigger tournaments and better promotions.

It is too early to tell whether shared liquidity will work. 888Poker may still enter the market, and Italy and Portugal are yet to sort out their cross-border licensing requirements. However, if history is not to repeat itself, PokerStars has to ensure players want to keep playing on its shared liquidity platform by maintaining this level of promotions. In the meantime, we say “Bonne Chance” and “Buena Suerte” to players in France and Spain, and fill your boots while PokerStars is putting so much money on the table.