Bjorn “Bjoerni89″ Schneider has been announced as the newest member of Team PokerStars Online. 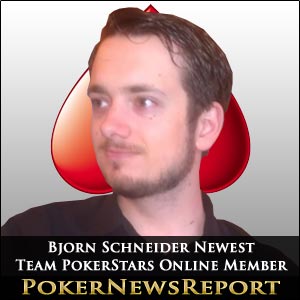 Bjorn “Bjoerni89″ Schneider has been announced as the newest member of Team PokerStars Online.

From Gottingen, Germany, the 22-year-old pro started playing at [geolink href=”https://www.pokernewsreport.com/pokerstars”]PokerStars.com[/geolink] a couple years ago by entering $5 nine-man SitNGos, but is now one of the poker site’s top heads-up SNG specialists at much higher stakes.

At the start of 2011, Schneider had moved up to $100 SNGs, but can now be found almost exclusively playing $5k heads-up SNGs.

Bjorn Schneider has been racking up huge VIP Player Points (VPPs) throughout the year and in one month accumulated over 600,000 VPPs. On his current total of 2,700,000 for this year, Schneider is threatening to set the one-year record of 3,055,285 VPPs held by Kevin ‘WizardOfAhhs’ Thurman with about five weeks remaining.

A glance at Schneider’s stats on PokerOptimizer show him losing $84,044 over 8,357 games played with a return on investment of -0.3%, but his exorbitant rakeback totals produce a solid profit for the latest PokerStars online pro.

In addition to excelling at SNG profitability, Schneider recently finished in 4th place at a $215 Sunday Warm-Up, taking home over $50,000 for his efforts.

When not playing poker grinding at SNGs, Schneider studies philosophy and history, and also enjoys video games such as Starcraft and World of Warcraft.