PokerStars will celebrate its 10th birthday next month, marking the milestone in the online poker industry by giving its players many opportunities to win cash and prizes in a multitude of promotions, including a Sunday Million tourney touted as the biggest ever. 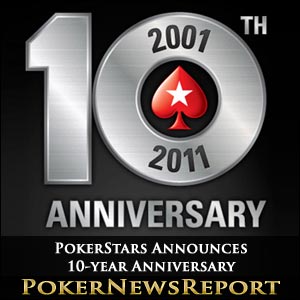 PokerStars will celebrate its 10th birthday next month, marking the milestone in the online poker industry by giving its players many opportunities to win cash and prizes in a multitude of promotions, including a Sunday Million tourney touted as the biggest ever.

Since offering real money poker on Dec. 12, 2001, PokerStars has become the world’s largest [geolink href=”https://www.pokernewsreport.com/online-poker-rooms”]online poker room[/geolink], dealing 70 billion poker hands in that time. That comes to an average of roughly 7 billion hands a year, 583,333,333 hands a month and 19,178,082 poker hands every day. Try reaching that total in live poker!

“Amazing that it’s been 10 years! I’m very proud of my association with PokerStars, and this December’s 10th Anniversary Celebration is going to be a doozy!” said Team PokerStars Pro Daniel Negreanu. “There will be tons of cash prizes for bankrolls of all sizes, plus giveaways and a $10 million Sunday Million event.”

The Sunday Million, PokerStars’ flagship event since March of 2006, will feature a $10 million guaranteed prize pool on Dec. 18, 2011, as part of the anniversary festival. That will be the largest guaranteed prize ever for the Sunday Million, with the buy-in remaining at $215. The winner is sure to pocket $2 million, at the least. The last PokerStars player to walk away with $2 million in a tournament was Tyson “POTTERPOKER” Marks, winning $2,278,097 at the main event of the 2010 World Championship of Online Poker (WCOOP) at a buy-in of $5,200.

Loyal players at PokerStars will also have the opportunity to win one of 100 packages, valued at over $15,000 each, to the PokerStars Caribbean Adventure (PCA) in Paradise Island, Bahamas, which is scheduled for Jan. 5 through Jan. 14, 2012. Beginning on Nov. 13 and continuing through Dec. 11, PokerStars will be hosting two weekly qualifiers, each awarding 10 PCA prize packages in addition to $10,000 cash to the champion.

The WCOOP at PokerStars has become online poker’s most prestigious event. It began in 2002 with only nine events and a $800,000 total prize pool. The annual online tournament series peaked in 2010 when the guaranteed prize pool reached $50 million.

The popularity of online poker soared in 2003 when PokerStars player Chris Moneymaker won a seat for the World Series of Poker (WSOP) Main Event through a PokerStars satellite tourney. The previously amateur Moneymaker went on to claim first place in the tournament. In just a few years following that excitement in the poker world, PokerStars was typically sending hundreds of players to the WSOP in Las Vegas, all taking their shot at poker immortality.

PokerStars has sent emails to its loyal players announcing the 10-year celebration and its first two promotions, the PCA package giveaways and the massive Sunday Million guarantee. Other special events of the festival celebration will be revealed in stages, so check the PokerStars site often to see the latest promotions awarding millions in cash and prizes. [isGeoAllowed]If you are not playing at PokerStars yet, take a look at our [geolink href=”https://www.pokernewsreport.com/pokerstars”]PokerStars review[/geolink] here.[/isGeoAllowed]