As part of PokerStars´ 100 Billion Hands Celebration, the site is offering players the chance to win free poker money every day in a ‘Zoom Boom’ promotion. 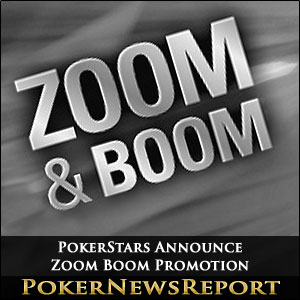 As part of PokerStars´ 100 Billion Hands Celebration, the site is offering players the chance to win free poker money every day in a ‘Zoom Boom’ promotion.

[geolink href=”https://www.pokernewsreport.com/pokerstars”]PokerStars[/geolink] has a reputation for coming up with innovative and rewarding offers that players of all levels can share in, and the company has done it again with their new ‘Zoom Boom’ promotion.

Players are being asked to nominate their ‘Greatest Poker Hand’ from a selection of 22 videos posted on the PokerStars YouTube page. The videos contain some of the best hands ever played during live poker tournaments and feature players such as Daniel Negreanu, Phil Hellmuth and a very young Jason Mercier.

Players can vote for their favourite or share it on Facebook and Twitter to earn the video an extra two votes. When voting closes on June 10th (this coming Monday), the videos with the three highest number of votes will be passed to a panel of PokerStars Pros (Daniel Negreanu, Liv Boeree and Lex Veldhuis) who will decide which of the three was the ‘Greatest PokerStars Hand’ ever.

How to Win Free PokerStars Money

Once the panel´s decision is revealed, any player who wins a hand with the same pocket cards (including suits) while playing Zoom Poker on PokerStars will be entitled to claim a prize of 100 times the Big Blind once they post their winning hand on BOOM! (the generally ignored button in the chat box).

Players can win a prize every day between June 24th and June 30th (up to a maximum of $100.00 each day) which will be credited to their PokerStars account with 48 hours.

Remember, the winning hand has to be posted on BOOM! to qualify for the prize.

The Zoom Boom promotion is just one of a number of offers being provided by PokerStars in their $5 million 100 Billion Hands Celebration and you can find out more about some of the other promotions in our ‘PokerStars Goes Wild with 100 Billionth Hand Promo’ feature.