Next month´s EPT Barcelona will be the 100th occasion on which PokerStars has sponsored an EPT event, and the company is planning a massive blowout to celebrate 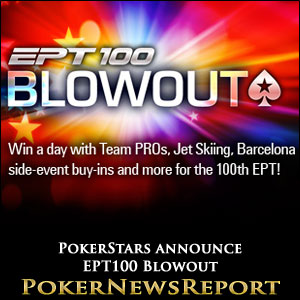 Next month´s EPT Barcelona will be the 100th occasion on which PokerStars has sponsored an EPT event, and the company is planning a massive blowout to celebrate

Thousands of players now attempt to qualify for the multi-million €uro prizes that can be won and, when Season 11 of the European Poker Tour gets underway in Barcelona on the August 16th, it will the hundredth time that [geolink href=”https://www.pokernewsreport.com/pokerstars”]PokerStars[/geolink] have sponsored the “Tour”.

The PokerStars EPT100 Blowout is likely to be a spectacular event, and already two unique challenges have been issued to players who intend qualifying for the EPT Barcelona Main Event – the “EPT100 Takedown” and the “EPT100 Brag”.

The PokerStars EPT100 Takedown is a challenge open to all players who win an EPT Barcelona Seat through an online satellite. Each online qualifier will be issued with a ticket to an exclusive freeroll tournament to be hosted on 17th August, and the top five finishers in the freeroll will be invited to compete in the Takedown Challenge.

The “Takedown” takes place on Day 1A of the Barcelona Main Event (21st August) and involves each of the five winners pairing up with a PokerStars Team Pro to compete in a three-part challenge – part 1 being a photo shoot competition and part 2 being a jet ski race.

The third part of the challenge is a 10-max poker game in which players will start with a stack of chips appropriate to how they have performed in the previous two parts of the challenge. The top three players in the 10-max poker tournament will be rewarded with entry into EPT Barcelona side events, with the first prize being a seat in the €2,200 buy-in Deepstack 8-Max event.

The EPT100 Brag is open to any player competing at the EPT Barcelona and will run from August 21st until August 25th. During the EPT100 Brag Challenge, players will be asked to take photographs of themselves wearing a special EPT patch (which can be picked up from the Reception Desk) and upload the photos onto their Twitter or Instagram accounts using the hashtag #EPT100Brag.

Players can upload as many photos of themselves as they like and, on the day after the challenge closes, a panel of PokerStars Team pros will choose the three which they think are best. Prizes for the winners include an iPad mini, designer branded sunglasses and other goodies from the PokerStars online store.

Full details of the EPT100 Blowout and the terms and conditions of the “Takedown” and “Brag” challenges can be found here and, to find the online satellites to the EPT Barcelona Main Event, go to the PokerStars client and follow “Events” > “EPT” > “Qualifiers”.