The EPT Season 9 Grand Final may have only just started, but already organisers of the hugely successful European Poker Tour are looking ahead to next season. 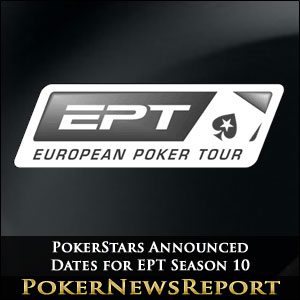 The EPT Season 9 Grand Final may have only just started, but already organisers of the hugely successful European Poker Tour are looking ahead to next season.

Just as Gleb Privalov was collecting his trophy for winning the first side event of the EPT Grand Final Season 9 (the €5,200 buy-in 6-Max Pot Limit Omaha Turbo) and Dan ‘Holla’ Smith was making a late assault on the leaderboard for Day 1A of the EPT Monte Carlo Main Event, the schedule has been announced for next season´s festivities.

Following the same pattern as Season 9, there will only be eight stops on the tour in EPT Season 10; but six of these eight (*) will coincide with other poker tours (such as the UKIPT, Estrellas Poker Tour, EUREKA Poker Tour and Italian Poker Tour) to repeat the huge fields and record-breaking prize pools seen throughout this Season. (*) the exceptions being the PokerStars Caribbean Adventure (PCA) and Grand Final in Monte Carlo

Speaking at the announcement of the dates, EPT President Edgar Stuchly said:

During a successful Season 9 where we decided to host fewer and bigger events incorporating the national tours, we listened to an enormous amount of player feedback who valued less time spent travelling, and more time spent playing. Since the San Remo tournament will be held immediately before the EPT Grand Final in April, it will mean players can spend the whole month of April on the beautiful Riviera.