PokerStars has announced a massive program of online poker promotions for the run-up to Christmas – starting this coming Sunday with “Double Vision Sunday”. 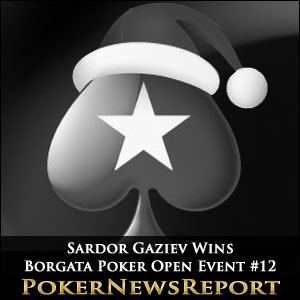 PokerStars has announced a massive program of online poker promotions for the run-up to Christmas – starting this coming Sunday with “Double Vision Sunday”.

Christmas is the time for giving and being with friends, and over the next few weeks PokerStars will be giving away up to $27 million in prizes and promotions to “friends” who play on the site.

The company has just unveiled an incredible selection of Christmas gifts – neatly wrapped up in a “December Poker Festival” bundle – and it is difficult to know which one to unwrap first.

Whether you are a hard-nosed online poker tournament grinder, a fan of sit n go games, or a recreational cash game player, PokerStars believes that there is something for everyone in the December poker Festival.

Each “Double Vision” event gets underway 30 minutes after the start of the primary event, with the same buy-ins, the same structure and the same prizes – a superb Christmas bonus for players with a stack load of tournament tickets and not enough Sundays to use them all!

The popular Golden Sit n Gos promotion will be running from Monday 2nd December all the way through to Sunday 8th December and – if you have never seen this promotion before – sit n go tables are randomly selected to win the following prizes:

On Sunday 8th and Sunday 15th December, PokerStars will be increasing the prize pool guarantees on selected Sunday Major tournaments to $1 million, and – on Sunday 8th December – making the Sunday Million a $5 million guaranteed event.

Every player who successfully completes their missions will be entered into the corresponding “Shoot Out” tournament (prizes range from $10,000 to $250,000 depending on the difficulty on the chosen mission) in which every player is all-in every hand until a winner is found.

Starting at midnight on 16th December, prizes will be awarded to players dealt into each 1 millionth hand (hands ending with six zeros). The promotion will continue for 300 million hands with the winner of the final hand receiving $4,000 + $1,000 for each VPP they have earned in their last fifty hands.

The fund for the Milestone Hands promotion is $700,000, and any money which is left over after all the millionth Milestone hands have been paid out will be distributed among everybody playing at tables in the same format and at the same stake as the 300 millionth (so if the 300 millionth hand was dealt on a table playing $0.05/$0.10 Omaha Hi/Lo, everybody playing $0.05/$0.10 Omaha Hi/Lo at the time will receive a prize.

From Friday 20th to Sunday 22nd December, PokerStars will be hosting 8 special WCOOP Challenge tournaments, each with a minimum guaranteed prize pool of $500,000 and each having an added bonus of a 2014 WCOOP Main Event ticket for the winner.

Some of the challenge series tournaments replace those in the regular Sunday schedule (for example, the Sunday Million that weekend will run as WCOOP Challenge 7 and have a $2 million guarantee), but all will have a comprehensive satellite schedule enabling players to qualify from just $1.65.

Further information about the PokerStars December Poker festival is available on [geolink href=”https://www.pokernewsreport.com/pokerstars”]PokerStars[/geolink], while registration is already open for the Double Vision Sundays, the Million Dollar Sundays and the WCOOP Challenge Series.