With just 100 days to go until the start of their Caribbean Adventure, PokerStars have announced that the Main Event will have a $10 million guarantee. 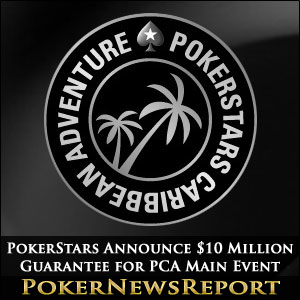 With just 100 days to go until the start of their Caribbean Adventure, PokerStars have announced that the Main Event will have a $10 million guarantee.

The PokerStars Caribbean Adventure has always been one of the “must go to” live poker events of the year, but for 2014, PokerStars have added an extra incentive – a $10 million guaranteed prize pool for the $10,300 buy-in Main Event.

Although it sounds like an incredible amount, PokerStars have based their not-too-ambitious guarantee on the fact that last year´s event (won in almost last-to-first fashion by Dimitar Danchev) attracted 987 players for a prize pool in excess of $9.5 million.

The Main Event starts on Tuesday January 7th 2014 – two days after the series gets started with the $100,000 buy-in ultra-high rollers – and between the two major competitions, a live Super Satellite into the Main Event is scheduled which will form part of an “early birds” offer currently  available.

Until October 20th the PokerStars VIP Store is offering discounted packages with 50% off of accommodation for up to eight nights at the Atlantis Hotel on Paradise Island in the Bahamas, plus a seat into the $1,100 buy-in Super Satellite in which you could win your seat into the $10million guaranteed Main Event.

Check out the VIP Store in the PokerStars client for more information, but don´t worry if you take advantage of the offer and then win a seat into the Main Event through one of their other promotions – PokerStars have stated that if this happens, players will have the $1,100 paid towards the satellite tournament credited to their online account.

More than One Way to the Bahamas

For players who do not have Negreanu-esque bankrolls, PokerStars are offering plenty of options for players to win full packages to the Bahamas in January. Several “Mega-path” series of sit n go and multi table tournaments are currently running on PokerStars, with buy-ins starting from just 3FPPs or $1.00.

This coming weekend – Sunday September 29th – also sees a $700.00 buy-in tournament hosted on PokerStars (for which satellite qualifiers are also available) which is guaranteeing five Main Event packages to the winners.

The packages include entry into the Main Event, hotel accommodation and $1,000 spending money, but most importantly, this tournament clashes with the WCOOP Main Event and it could be possible that a little bit of value will be available to the prize winners!