While efforts to enter the U.S. market continue, PokerStars has also set its sights on expanding in the Asian market as of late. 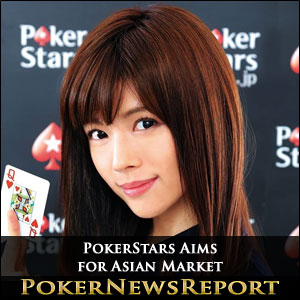 While efforts to enter the U.S. market continue, PokerStars has also set its sights on expanding in the Asian market as of late.

Both China and Japan are on the radar of the honchos at PokerStars, as evidenced by recent initiatives in those countries. The first of those endeavors began in January when Kosei Ichinose from Japan joined WSOP bracelet winner Naoya Kihara as Japanese Team Pros at PokerStars.

A Supernova Elite, Ichinose is legendary in the online poker realm and was signed to be an ambassador and attract players from that region of the globe. Joining him following a recent announcement from the world’s leading online poker site is Yuiko Matsukawa, a Japanese actress and model who falls under the category of brand ambassador with celebrity status.

Matsukawa joins the likes of Rafael Nadal and Ronaldo as celebrities whose aim is to promote the brand by making appearances at poker tournaments and various activities pertaining to marketing. Nadal has done wonders for PokerStars in terms of recognition due to his striking good looks and there is no doubt that the lovely Matsukawa will do the same.

Matsukawa played in the Macau Poker Cup earlier in March and admitted to being honored to be a member of the PokerStars team. Though her lack of poker skills made Matsukawa a bit nervous at first, she settled in and was able to relax. The 24-year-old beauty, who has appeared in fashion magazines and on Japanese reality TV, has promised to improve her poker skills in advance of her next tournament appearance.

PokerStars Director of Corporate Communications Eric Hollreiser referred to Matsukawa as an exciting celebrity who has developed an intense interest in poker and is keen on sharing her love of the game with her growing number of fans. He added that her role as ambassador will be to extoll the virtues of poker as an exciting, skill-based game in her home country of Japan and around the world.

While PokerStars’ attempts to re-enter the U.S. online poker market have stalled, that is certainly not the case in Asia. The poker room’s dominance in the world of online poker can be felt in nearly every jurisdiction of the globe, and that presence has recently increased greatly in Japan and China.