PokerStars Aim to Create 5 More Millionaires in Next 8 Weeks

PokerStars has launched a “PokerStars Makes Millionaires” promotion which aims to permanently change the lives of five players before the end of May. 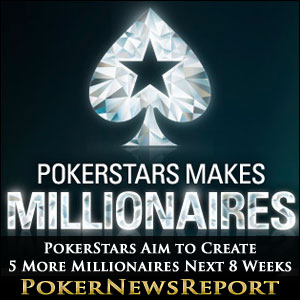 PokerStars has launched a “PokerStars Makes Millionaires” promotion which aims to permanently change the lives of five players before the end of May.

“PokerStars Makes Millionaires” is more of a statement of fact than a catchy name for a new promotion. In the past ten years, PokerStars had created more than 130 millionaires through live events and online tournaments, and now the world´s largest online poker company is aiming to create five more within the next eight weeks.

The promotion – which got underway last Friday – consists of five elements which give players of all bankrolls and of all skill levels the chance to win a seven-figure amount. Each of the elements is described below; and, for more information, PokerStars has created a comprehensive “FAQ” page.

After creating three millionaires in one week back in January, PokerStars is re-introducing its million dollar Spin & Go games – three-handed random prize money hyper turbos, in which players start with 500 chips. PokerStars will pay at least one million dollar prize during the promotional period, with the second and third placed players each receiving $100,000.

To participate in the Million Dollar Spin & Go promotion, players simply need to enter a Spin & Go game with a buy-in of $5.00 (other buy-ins do not qualify for the promotion). Each game will start after the spinner in the middle of the table has revealed what the prize for each game will be. Prize levels start at $10.00, with seven further levels leading up to the $1,000,000 first prize.

Be a $1 Million Winner in Monte Carlo

The second element of the “PokerStars Makes Millionaires” promotion is the opportunity to win a package to the EPT Monte Carlo and play in the Main Event – which guarantees $1 million to the winner. Every player who makes a deposit of $70 or more using the PokerStars bonus code “EPTMILLION” (prior to April 6th) will receive a free $11.00 satellite ticket through which they can qualify for the target event.

PokerStars is also hosting a no-deposit-required route to EPT Monte Carlo which consists of a series of five times daily freerolls that will be played during this week. The top 250 players in each daily EPT freeroll will qualify for a freeroll final being played next Monday (April 6th) – which has three packages up for grabs as well as $5,000 in cash prizes.

The first of two rounds of “Millionaire Month” gets underway on Monday, and comprises of six challenges that players can complete to win seats in All-in Shootouts. Winners of each of the six All-in Shootouts progress to a Millionaire Final, which will be played as a standard 6-Max tournament – the winner walking away with a cool $1,000,000 (there are prizes for all six finalists).

The six all-in shootouts take place on Saturday April 18th; and, to win a seat in one of the shootout events, players must complete one (or more) of the following challenges:

Please note that you have to opt in to each challenge to take part in Round 1 the promotion – which runs from April 6th to April 17th – and hands played in games of Zoom poker (or any variant other than NL Texas Hold´em) do not count towards the promotion. Each All-in shootout will be played on April 18th, and has a prize pool of $150,000 in addition to the seat at the Millionaires Final – the date of which is May 10th.

Round 2 of Millionaires Month starts on April 19th and runs through to April 30th. The structure of the promotion and the prizes are the same as in Round 1, but with different qualifying criteria and the focus being on Zoom NL Texas Hold´em games rather than 6-Max and full-ring games. Therefore, to qualify for a seat in one of the All-in Shootouts to be played on May 1st, players have to:

Remember that you have to opt in for each of the challenges in order to be eligible for Millionaire Month – Round 2. The six winners from the All-in Shootouts will progress to their own Millionaires Final – also on May 10th.

The fifth leg of the “PokerStars Makes Millionaires” promotion is an All-in Shootout on May 22, in which 2,048 players will win tickets to Spring Championship of Online Poker Main Events. The top sixteen players in the Shootout will have the best chance of increasing their bankrolls by $1 million, as they will win an entry into the $10,300 buy-in SCOOP “High” Main Event – which guarantees a minimum of $1 million to the winner.

Players who finish in 17th-128th positions will be awarded a ticket to the $1,050 buy-in SCOOP “Mid” Main Event, and all the other winners will win an entry into the $109.00 buy-in SCOOP “Low” Main Event. There will also be a “Last Longer” competition for players who compete in the SCOOP “High” Main Event, which will pay $50,000, $25,000 and $10,000 to the three players who last longest in the tournament after winning their seat in the May 22 Shootout.

In order to get a seat in the May 22 Shootout, all players have to do in make a deposit into their PokerStars account using the [geolink href=”https://www.pokernewsreport.com/pokerstars”]PokerStars bonus code[/geolink] “SCOOP2015”. Please note that if you make a withdrawal during the promotional period, you will not be eligible for the Shootout tournament, and all tickets won in the Shootout must be used in the SCOOP Main Events – they cannot be exchanged for cash or tournament credits.

Good Luck to all PokerNewsReport readers competing in the “PokerStars Makes Millionaires” promotion!