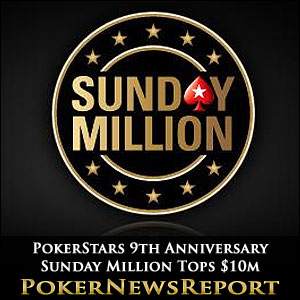 The last of those players were in front of their computers for almost 15 hours, according to PokerStars blog. That is, if they didn’t enter during a late registration period that lasted 3 and 1/2 hours.

The first place prize of $597,719 went to Mexico’s ‘BRAYDEN93.’ But that was not the most money won, as a deal between the final 7 players was reached while ‘kelly_koulis’ was the chip leader by a huge margin over the other six remaining players.

A runner-up finish was as high as ‘kelly_koulis’ would go, although the player from Greece added $725,267 to his or her bankroll. That’s an hourly wage of about $48,351. By the way, ‘kelly_koulis’ earned a seat to the 9th Anniversary Sunday Million by excelling in an $11 satellite.

The last of the final tablists, ‘Kokli_1’ from the Czech Republic, likely has a few stories to tell of how his $87,247 would have been more if only cards had fallen his way. But his complaints are likely overshadowed by gratitude in making the final table in online poker’s most popular tournament that has run every week for 9 years.

Incidentally, the final table deal made by the last 7 players was accomplished in only about eight minutes of negotiating. And that from players representing seven different countries.

By all accounts, the PokerStars 9th Anniversary Sunday Million was a smashing success. The prize pool of over $10 million means that in its 9 years of existence, the Sunday Million has paid out more than $688 million to players who finished in the money.

It also means that PokerStars will likely throw a massive bash for next year’s 10th Anniversary Sunday Million. Don’t be surprised if the guarantee is at least $10 million for that one!