The PokerStars 72nd billionth hand dealt concluded on a no-limit table with blinds of $.02 and $.05, the lucky winner got $24,300 for winning the hand. 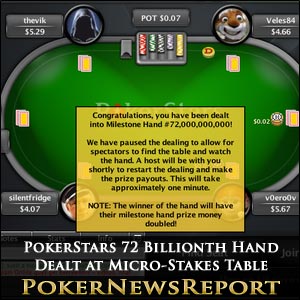 As part of its 10-year anniversary celebration, PokerStars’ promotion to reward its loyal players with $750,000 leading up to and including the 72nd billionth hand dealt in the poker site’s history concluded as a player seated at a no-limit table with blinds of $.02 and $.05 was the lucky winner of $24,300 for winning hand no. 72 billion.

Kozlicek_x from the Czech Republic moved all-in pre-flop with pocket 7♠, catching another 7 on the flop to give him a set and the huge payday. The lucky Czech also pocketed $27.30 for winning the hand. The other five players at the six-handed table didn’t fare too shabbily either, splitting about $95,000 around the table with the least amount won being $12,150.

One of the players, 7th_floor, went all-in with 2-3 offsuit, hoping to hit a miracle. His luck was not in the cards, but it was in being on the right table at the right time. His poor starting hand didn’t even pair up, but he managed to take home $14,730 for just playing in the milestone hand.

PokerStars typically promotes its milestone hands at every five billion hands played, but the world’s leading poker site ran into a bit of controversy when it was learned that the players at the heads-up table who were dealt the 70 billionth hand were fast-folding their cards in order to increase their chances of landing the big milestone hand. PokerStars made sure that didn’t happen again this time by disabling all heads-up tables in plenty of time before the milestone hand was dealt.

Here is a breakdown of the amounts won by each player in the 72 billionth hand:

The 72 billionth hand promotion, in addition to the 10-year anniversary festivities, allowed PokerStars to gain 9.3% in player traffic over the last week. The surge in players at the site is expected to continue at least another week leading up to next weekend’s 10th Anniversary $10,000 High Roller event, and also the massive $10 million guaranteed 10th Anniversary Sunday Million.