PokerStars is hosting a “WCOOP Challenge” series of tournaments from Friday to Sunday, with $7 million guaranteed in prize pools over the nine events. 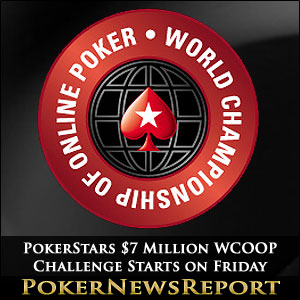 PokerStars is hosting a “WCOOP Challenge” series of tournaments from Friday to Sunday, with $7 million guaranteed in prize pools over the nine events.

Following on from the success of their MicroMillions Series which concluded with 69FABIAN69´s victory in the Main Event, PokerStars is hosting a mini-series of tournaments this weekend with valuable prizes and tickets for the World Championships of Online Poker (WCOOP) up for grabs.

Compared to the miniscule cost of entering the MicroMillions´ tournaments, the WCOOP Challenge events have some hefty buy-ins; so PokerStars is also hosting “deadline satellites” immediately before each of the feature events in order that players can get involved at a fraction of the full buy-in. The site has also announced an extra special bonus for players making a deposit into their accounts over the forthcoming weekend.

The schedule for the WCOOP Challenge Series replaces some of the weekend´s regular tournaments, but increases their regular guarantees as well. For example, event #1 of the Series is a $109.00 buy-in NLHE freezeout which replaces the regular “Big $109”, and event #8 of the Series is the Sunday Millions with a $1.5 million guarantee.

In addition to the enhanced guarantees, PokerStars is giving the winner of each WCOOP Challenge tournament a free ticket into the $10 million guaranteed WCOOP Main Event (worth $5,200) due to be played towards the end of September. The full schedule is as follows:

More than 1,200 seats to the feature events are guaranteed in PokerStars last-minute “deadline satellites” and with buy-ins starting from just $7.50, the satellites provide an excellent opportunity for players with modest bankrolls to get into the money in some of these prestigious events. The highlight of the series – the $2,100 buy-in Main Event – has three satellites scheduled to take place within 45 minutes of the feature tournament getting underway, and the buy-ins for these range from $82.00 (25 seats guaranteed), through $215.00 (40 seats guaranteed) up to $700.00 (30 seats guaranteed).

Full details of the PokerStars WCOOP Challenge Series and the Deadline Satellites can be found on their dedicated web page.

PokerStars are also giving players who make a deposit into their accounts before 23:59 (ET) on Thursday 31st July the opportunity to win free cash in a Deposit Shootout Bonus. Three $50,000 all-in shootout tournaments will be held on Monday 4th August with entry offered to players who fund their accounts using a special PokerStars bonus code and then earn the required number of VPP Points:

One the clearing requirements have been reached, players can enter the tournament of their choice. The ShootOuts get underway at 14:05, 15:05 and 16:05 on Monday 4 August – each with a $50,000 prize pool and each guaranteeing $5,000 to the winner. The tournaments and further information can be found under “Tourney” > “All” tab in the PokerStars client.