As was expected due to American players being shut out from playing in this year’s PokerStars World Championship of Online Poker, the amount of dollars in play was down substantially from 2010. 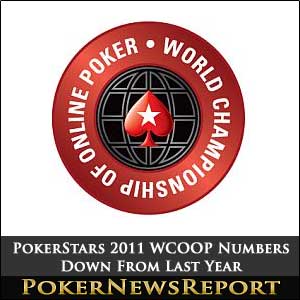 As expected due to American players being shut out from playing in this year’s PokerStars World Championship of Online Poker, the amount of dollars in play was down substantially from 2010.

In 62 WCOOP events, the same amount of tournaments as last year, $47,120,800 was awarded to players finishing in-the-money in 2011. The total dollars paid out to winners in 2010 exceeded $63 million. However, every event in 2011 did make the guaranteed payout amount set by the world’s largest poker site.

In events that had what was considered by industry observers to be high buy-in amounts, the size of the playing field was approximately 35% less than last year. For the smaller and mid-level buy-in tourneys, the field size saw a decrease of around 20% to 25% than the same tournaments played in 2010.

PokerStars collected more than $2.7 million in rake in this year’s online poker championship, taking $325,400 of that total from the main event. When calculating the average rake of all 62 events combined, online players generated $43,850.61 for each event for PokerStars coffers.

An interesting statistic that is in no doubt a reflection of American players fleeing the U.S. and crossing the border into Canada to participate in the popular tournaments was that six players from Canada won WCOOP bracelets this year. That happens to be six more bracelets than the total won by Canadian players in 2010. Canadians also took more money home in 2011 than players from other countries, collecting $6.4 million. Of that $6.4 million, $119,193 went to Daniel Negreanu, Canada’s most famous pro, for landing in-the-money in 15 of the 52 tournaments that he bought in.

Russia led the way in the number of entrants by country this year, beating out Canada by slightly more than 700 entrants. Russians also won the most bracelets in 2011, taking home ten of the coveted 1st place prizes.

Despite the lack of American presence, the $47.1 million in prize money was the third highest total since the inception of the WCOOP in 2002.

I’m sure I’m not alone in hoping that Americans will once again be allowed to play online poker in the WCOOP in 2012 without having to cross any borders to buy-in.