PokerStars 2011 Cash Leaderboard Race May go Down to Wire

Ilari Sahamies and Rafi Amit continue their battle for the title of the biggest PokerStars cash winner for 2011 with less than two weeks to go. 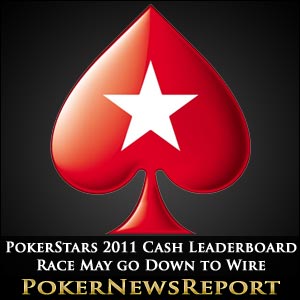 Ilari “Ilari FIN” Sahamies and Rafi “refaelamit” Amit continue their battle for the title of the biggest PokerStars cash winner for 2011 with less than two weeks to go.

Sahamies, the more well-known player of the two, has been a high-stakes pro for a number of years and has appeared on several poker TV programs. The exposure and his trash-talking style have enabled the Finnish pro to develop a fan following in both the live and online poker arenas. However, Sahamies insists that the insults directed toward opposing players at the table are done merely for fun and those players on the receiving end of his barbs are actually good friends of his. In addition to his poker prowess, Sahamies won two Finnish billiard junior championships, as well as a Finland watersliding title in 2009.

Amit, winner of two World Series of Poker (WSOP) bracelets in his career, is an Israeli poker pro who has also excelled both live and online. His bracelets were won at a $10,000 Pot Limit Omaha event in 2005 that earned him more than half a million dollars and in 2007 in a $1,000 Deuce to Seven Triple Draw Lowball with rebuys tournament, pocketing more than $227,000. Amit has esentially stopped entering live tourneys to better focus on taking the cash of his online opponents.

Sahamies is currently in front in the leaderboard race by about $400,000 as of the first week of December. But 2011 has been anything but smooth sailing for the 28-year-old Finn. He was a losing player through July, in the hole a whopping $873,360. In the last four months through November, “Ilari FIN” has enjoyed a most favorable upswing, winning almost $3 million during that stretch. December has seen Sahamies good fortunes continue to the tune of roughly $320,000 in profits against various other high-stakes opponents, typically at 6-man pot limit Omaha tables.

Amit’s 2011 has been entirely different, as he has never been in the red for the year. Posting a profit from the get-go of $262,480 in January, Amit tallied $800,990 in winnings through April, but didn’t log on for the following three months for reasons unknown. In his best month of the year, Amit won more than $1 million in September, concluding the month with winnings totalling $1,830,000 for the year. Seemingly, the 2011 cash winner crown at the world’s largest poker site was his at the time, until Sahamies went on his current winning streak, catching and passing Amit in November and crushing his online opponents on the way.

Blom, by the way, has been making noise as a dark horse in the 2011 cash leaderboard race as of late. In a recent three-day period this month, Blom had winnings of $1.6 million, only to surrender half of it in a losing session on the following day. As it stands now, Blom has a bit more than $1 million in 2011 winnings. He has quite a way to go to catch Sahamies and Amit, but has never been shy at the high roller online poker action.

With the high-stakes played by the 2011 ring game frontrunners, leads can disappear in a single session or night. The last couple weeks of the year should be highly entertaining as the online pros battle for the title of PokerStars’ top cash game winner in 2011. [isGeoAllowed]If you are not playing at PokerStars yet, read our [geolink href=”https://www.pokernewsreport.com/pokerstars”]PokerStars review[/geolink] here.[/isGeoAllowed]