PokerStars is celebrating the sixth anniversary the Sunday Storm by hosting a special version of the popular event with a $1,000,000 guaranteed prize pool. 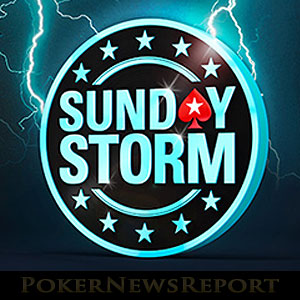 PokerStars is celebrating the sixth anniversary the Sunday Storm by hosting a special version of the popular event with a $1,000,000 guaranteed prize pool.

Despite the number of entries and the 10,000 chip starting stack, the Sunday Storm is fast. Antes are in play from the first level and blinds increase every ten minutes. Usually the tournament is over within twelve hours, with one lucky winner adding somewhere near $30,000 to their bankroll.

However, on Sunday March 19, one player is going to walk away with $100,000 for their $11.00 buy-in. That´s the promise being made by PokerStars for the tournament´s sixth anniversary event – an event that is sure to be more popular than ever due to its $1,000,000 guaranteed prize pool.

About the Sunday Storm Tournament

The Sunday Storm gets underway at 1:00pm ET (6:00pm GMT) each week with late registration open for 2½ hours (fifteen levels). By the end of late registration, the blinds have increased to 600/1,200 (ante 120) so there is no hiding place for players with the intention of playing tight.

For the sixth anniversary Sunday Storm event, there will be even more chips on the table than normal. PokerStars is allowing players to re-enter up to three times during the late registration period, which implies it is going to be a seriously aggressive episode of the tournament.

Despite the prize pool being more than three times its normal size, it is not guaranteed that the Sunday Storm will attract three times as many players. Therefore there should be a considerable amount of overlay available for players who cash in the event.

Plenty of Cheap Seats Up For Grabs

Naturally, PokerStars want to attract as many players to the tournament as possible; so, in addition to the site´s regular Sit & Go and MTT satellites, the site is hosting three mega-satellites prior to the special event that between them guarantee 1,000 seats to the Sunday Storm sixth anniversary tournament. Each mega-satellite has a buy-in of $1.10, but each has a different structure:

If you fancy flexing your poker-playing skills in what is likely to be a very aggressive event, head on over to PokerStars now and book your seat in the sixth anniversary Sunday Storm event. Although we do not expect the 175,000 limit on the maximum number of players to be in danger, you would not want to miss this opportunity to win a life-changing amount.

If you have not already made a real-money deposit at the site, be sure to fund your account using the [geolink href=”https://www.pokernewsreport.com/pokerstars”]PokerStars bonus code[/geolink] [bonuscode room=”pokerstars”] in order to be eligible for a 100% match bonus on your first three deposits over the next ninety days (up to a maximum bonus amount of £400/€500/$600). At least that way, if you fail to cash in the sixth anniversary Sunday Storm event, you will be able to get your hands on some free poker money at PokerStars.