Cash totaling $5 million is being given away by PokerStars this month in its “Road to 100 Billion” promo, with the big milestone hand expected by week’s end. 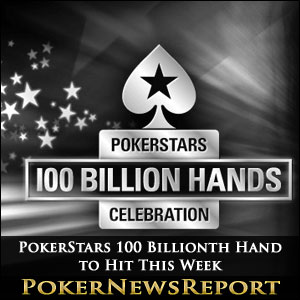 Cash totaling $5 million is being given away by PokerStars this month in its “Road to 100 Billion” promo, with the big milestone hand expected by week’s end.

A whopping $3 million of free cash is earmarked for tournament players who can choose among “Golden SitNGoes,” a tournament that aims to break the record for most players ever, and freeroll and Zoom Poker tourneys that both have guaranteed $1 million prize pools. The remaining $2 million will be credited to the accounts of ring game players who happen to participate in any one of 300 milestone hands.

The milestone hand payouts began at 99,700,000,000 over the weekend and will continue every millionth hand until 100 billion is hit later this week. A total of $1 million will be paid out on the big 100 billionth hand. At least $100,000 will go to the winner of the hand and the rest will be split among the lucky winner’s tablemates and those playing the same game type and stake level at other PokerStars cash game tables.

PokerStars dealt its first real-money hand in September of 2001. Less than 12 years later, the world’s leading poker site will reach 100 billion. A remarkable achievement in the online poker industry. Congratulations go out to PokerStars and all the players who made the historical feat possible!

If you are not yet one of those players, there is still time to join in the fun and take your shot at one of the 299 milestone hands leading up to the big one, or better yet, the 100 billionth hand! [isGeoAllowed][geolink href=”https://www.pokernewsreport.com/pokerstars”]Take a look at our PokerStars review[/geolink] to learn about all the benefits available to players who sign up at the no. 1 online poker site.[/isGeoAllowed]

Don’t forget that those benefits include a 100% up to $600 first-time deposit bonus. A full six months is permitted to clear the bonus, with three separate deposits allowed over 90 days that all count as the first one. Whether you prefer tournament or ring game action, this is the perfect time to make that first deposit. The Road to 100 Billion is in high gear and is happening this week!