PokerScout Fires Back at Bodog’s Attempt to Block Data Tracking 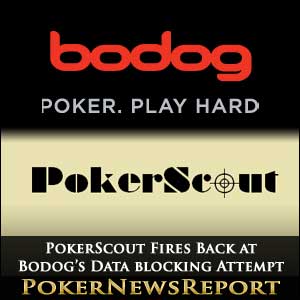 PokerScout, one of the online poker industry’s leaders in providing players with data focusing on site traffic for all known online poker networks, has refused to stop tracking and publishing Bodog Poker’s traffic numbers.

The online poker traffic website has issued a statement to its readers promising to continue providing its traffic site statistics, including those of Bodog, to online poker players despite Bodog’s request to be removed from its numbers tracking software.

[geolink href=”https://www.pokernewsreport.com/bodog-poker”]Bodog Poker[/geolink] has attempted to block its own traffic data by hiding tables that are full from its poker lobby. In so doing, Bodog is hoping to keep PokerScout from obtaining an accurate reading of player traffic. PokerScout has claimed that its ability to track traffic at Bodog is largely unaffected by this move. The statement goes on to say that accuracy in traffic numbers is obtained for Bodog by a combination of data and known traffic patterns. PokerScout insists that its results are an accurate average of Bodog’s traffic despite the attempted blockage and, if need be, the data tracking site will simply publish estimates of Bodog’s traffic as we do for some other untracked sites.

Bodog claims that each individual poker operator’s data belongs to the site itself and if a site such as Bodog requests that its traffic numbers not be tracked, PokerScout should honor that request. In refusing to honor its request, Bodog believes that PokerScout is guilty of data theft.

There is no question that the operators own their data and can come down [stop providing data] anytime they want, said Calvin Ayre, founder of Bodog, in response to a reader’s comment suggesting that the data compiled by PokerScout is public information since online poker games are played in public and plain for all to see.

Bodog further asserts that if PokerScout estimates traffic, they are not stealing data anymore, but are then guilty of consumer fraud by publishing traffic numbers as real and not divulging to their readers which numbers are factually accurate and which are merely estimates.

Bodog feels the need to be removed from traffic tracking software in order to protect its recreational players from the more skilled players who use traffic statistics to gain an edge over less experienced players.

If we talk about sites reporting player numbers, size and growth are clear indicators of which sites are successful attracting casual players, said Jonas Odman, vice president of Bodog Network.

Bodog is the one of the world’s premier gambling websites, providing bettors with several options to place wagers including sports betting, horse racing, an online casino and poker. It is widely perceived in the poker industry that online poker is but a small fraction of Bodog’s profit margin. Its main customers are believed to be serious sports and horse-racing bettors who happen to wander over, with a click of their mouse, to the online poker tables after placing their sports bets to enjoy a bit of casual poker play.

In other words, Bodog would like nothing more than to protect its casual players from the poker sharks who use traffic data to prey on the fish. If the sharks don’t play at Bodog due to lack of information on accurate traffic numbers, then more profits will go to Bodog through raked pots.

PokerScout has been providing poker traffic statistics since 2006 and claims no poker operator besides Bodog has ever requested to be removed from its database. The numbers compiled by PokerScout do not include statistics on each individual player and are used by players more as a scorecard that shows where the sites rank relative to each other and who is outperforming whom, the statement said. PokerScout firmly believes that the data they provide is available to all players and gives no player any advantage over another.

Bodog is the only operator to suggest that it does, the statement added.