Party Poker´s recently concluded “Pokerfest” series cost the online poker company almost $80,000 in overlays it was revealed today – with the majority of the shortfall coming in the feature $1 million guaranteed Main Event. 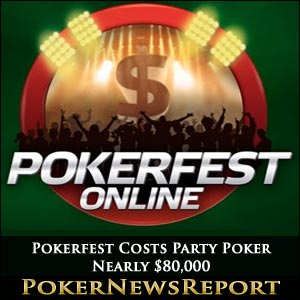 Party Poker´s recently concluded “Pokerfest” series cost the online poker company almost $80,000 in overlays it was revealed today – with the majority of the shortfall coming in the feature $1 million guaranteed Main Event.

The “Pokerfest” series was intended to fill the void left by Full Tilt Poker´s “FTOPS” series (they would have been up to XXII by now) and offered a range of tournaments in their 47 event program with buy-ins varying from 5 Party Points up to the $1,060.00 Hi-Rollers Event. Each of the tournaments had a guaranteed prize pool with a total value of $3 million and a month of qualifying satellites tournaments were played on the site prior to the beginning of the series.

The early tournaments of the Party Poker Pokerfest started well enough, with many of the early tournaments easily making their guarantees. However, under-subscribed tournaments started to appear before the series was half way through its run. Event #19 – the $109.00 buy-in $100,000 Guaranteed NLHE R/A – only just scraped over the guarantee due to some very loose play in the first hour of the tournament, and Events #22 (6-Max Deepstack) and #23 ($200.00 NL Hold´em) both fell short of their guarantees by $6,900 and $17,600 respectively.

Re-Buys Save the Final Week

The final week of the Pokerfest series was largely comprised of re-buy/add-on tournaments and, with the fishy nature of Party Poker players, the conservative guarantees were met – although it was a close run thing on Event #41 which made the guarantee by just 14 add-ons. Qualifying satellites were still being hosted for the $600.00 + $40.00 Main Event, but there were already a few furrowed brows at Party Poker Towers about how poorly the tournament was stacking up.

When the cards were in the air for the finale of the Pokerfest Series, only 1,576 players had paid the buy-in or qualified for the $1 million guaranteed tournament – leaving an overlay of $54,400. The major benefactors of this value to players were “koppiesop” and “boomerfancy”, who did a deal when the event got to the heads up stage, and walked away with $165,000 and $145,000 respectively – not only 5.75% more than they would have if the event had not been guaranteed (about $8K each), but having enjoyed a clearer path to the final table than if the tournament had been fully subscribed.