Poker770 to Pull Out of Spanish Market

Poker770.es – one of the few iPoker skins active in the regulated Spanish online poker market – has announced that it is going to close its doors from 1st March. 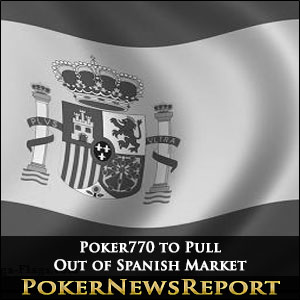 Poker770.es – one of the few iPoker skins active in the regulated Spanish online poker market – has announced that it is going to close its doors from 1st March.

The restrictive online poker market in Spain has claimed another victim following the announcement via Twitter that Poker770.es will be closing down at the end of the month. Without explaining exactly why the site was ceasing its activity in the Spanish market, the message on the Twitter account assured players that their funds were 100% safe and that affiliate accounts would be settled by 31st March.

The withdrawal of Poker770.es from Spain follows those of PAF and the Ongame Network in a market which is dominated by PokerStars.es and 888Poker.es, and which has lost thousands of players to unregulated offshore online poker sites which can charge lower rake (because they have lower tax liabilities) and provide better reward programs.

What Now for iPoker in Spain?

The demise of Poker700.es is likely to have a significant impact on the number of players competing on the iPoker network in Spain. Many of the leading iPoker skins in the rest of the world opted not to pay the exorbitant licensing fees when the Spanish online poker market was regulated in 2012, and consequently, Poker770.es was a major player on the network.

The remaining Spanish iPoker skins consist of Bet365 and Betfair – who are likely to maintain a presence in Spain because of their strong sports betting action – Titanbet.es (which has a very small profile in Spain) and CasinoGranMadrid.es – the online site for Spain´s biggest B&M Casino where the Victor Antoranz recently won the Estrellas Poker Tour Main Event.

Other than PokerStars.es and 888Poker.es – who between them control 90% of the market share – there are very few options for Spanish online poker players. PartyPoker has a very quiet site which is inhabited by sports-betting degens from sister company Bwin.es and which charges ridiculously high levels of rake to recover the €33.6 million it paid the Spanish government in back taxes in order to get its operating license.

The other operators in the Spanish market are Boss Media (PokerHeaven.es) and Ladbrokes (LBapuestas.es) – both of which are dying a slow and painful death, with average traffic at the cash tables currently being recorded at 26 players and 6 players respectively.

The only other alternative for online poker players from Spain is to play on unregulated sites which most commonly support players from the US. Spanish players looking to play on these sites to make their poker experience more lucrative should be aware that the deposit and withdrawal options are not so comprehensive as you are likely to find on domestic sites, and most poker operators will charge a fee when you make a withdrawal (or deduct any payment processing charges from the amount you receive).