Lou Krieger, who wrote nearly a dozen books on poker, has passed away after a long struggle with cancer. The poker world mourns his death. 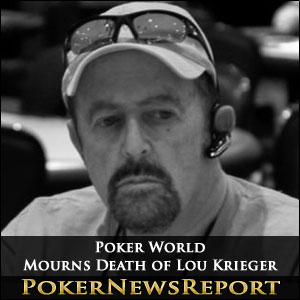 Lou Krieger, who wrote nearly a dozen books on poker, has passed away after a long struggle with cancer. The poker world mourns his death.

After battling cancer of the esophagus for some time, Krieger passed away on Monday with his family around him. A message was posted on his Facebook page by his family:

It is my deepest regret to inform you that early this morning Lou’s fight against cancer ended. He fought courageously to the end with the same pride and dignity that carried him through his life. He wanted everyone to know that he did not go peacefully in his sleep but fighting like hell. He was surrounded by his family. We know he would want everyone to keep floppin’ aces. He will be missed by all that knew him. Poker has lost a star.

Lou Krieger, who learned about poker at the age of seven while watching his father’s weekly game around the kitchen table, started to play seriously after his first visit to Vegas. After trying his hand at several variants of the game, he fell in love with Texas Hold ‘em and started to study the game’s rules and strategies through books, all the while applying what he learned to his own games and building his bankroll up steadily.

Krieger felt that there was a niche in the market for good, easy-to-read poker guides and went on to pen a total of eleven books on the subject. Some of his popular books are Hold ‘em Excellence: From Beginner to Winner, published in 1995, Poker for Dummies in 2000, and The Poker Player’s Bible in 2004. Some of his other works included Secrets the Pros Won’t Tell you about Winning Hold ‘em Poker and Winning Omaha/8 Poker. His books were read by millions and remain permanent fixtures on the bookshelves of poker fans across the world.

Lou Krieger was a regular contributor to publications such as Card Player Magazine, and served as editor of The Poker Player Newspaper from 2007 until this year.

The poker world will miss the man who managed to deliver his own passion for the game through his timeless works. RIP Lou Krieger.