Big-name pros galore will line up for this week’s first ever International Federation of Poker (IFP) Nations Cup in London. 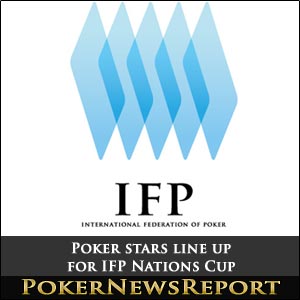 Big-name pros galore will line up for this week’s first ever International Federation of Poker (IFP) Nations Cup in London.

The tournament is running as part of the London Mind Sports Festival, and will see 12 teams take part in a succession of duplicate poker matches that will leave The Eye for Day 2 to run at County Hall tomorrow.

Duplicate poker is played by each table being dealt the same hands, with players receiving points for how successful they are in a hand when compared to those with the same cards.

Big Deal author Tony Holden heads the IFP and he believes that “duplicate poker removes the element of luck and conforms more to a truly sporting occasion.

“With all players in a particular seat given the same allocation of cards the only determining factor in the result of the tournament is how skilfully each player uses them.”

The IFP president added that “the Nations Cup will be a genuine celebration of all that is best in intellectual sports – some of the world’s best players playing for pride and the honour of representing their countries in an intense competition with the added spice of international rivalry.

“Poker is played by millions around the world and duplicate poker is the game in its purest form. Players compete against each other based on skill, without any fluctuation in chance. I believe that it’s the best way to highlight poker as a game of strategic skill and as a mind sport.”

However, the USA might well have the strongest line-up for the event with 2011 Poker Hall of Fame inductee Barry Greenstein leading a team that also includes Selbst, World Series of Poker (WSOP) bracelet winners Esfandiari, Matt Matros and Ali Eslami, as well as online stars Jennifer ‘Jennicide’ Leigh and Isaac Haxton.

Other nations taking part include Spain, Germany, Ireland, Netherlands, Australia, Japan and Denmark, as well as a side from online company Zynga.

Therefore, railbirds will also get the chance to watch the likes of November Niner O’Dea, his son Donnachea, ‘Mad’ Marty Smyth, Dermot Blain, Black, Cat O’Neill and the enjoyable skipper Parkinson, of Ireland, over the two days of competition, while outgoing Aussie Tony G will be joined by the veteran skipper Mel Judah and Women in Poker Hall of Famer Marsha Waggoner.

Then there is Spain’s Leo Margets, Juan Maceiras and Raul Paez to look out for, as well as Brazilian stars Andre Akkari, Alexandre Gomes, Christian Kruel and Felipe Ramos, while Japan include the exciting Gen Watanabe.

Finally, Team Zynga Poker will by skippered by Jennefer Gallenberger, and it should be interesting to see how many of the side’s players fare in what will be their first experience of live tournament poker.

The Nations Cup will be followed on Saturday by The Table, which is a featured tournament included in the four-day festival put and will feature 135 of the world’s best players battling in a $500,000 prize pool, with $250,000 going to the champ.

Never fear, films crews will be on hand to capture the excitement of this event and highlights will be broadcast worldwide soon after the tournament ends.

Although this event is invitation-only this week, The Table will become an open event next year.