Ryan Young, a 2007 WSOP bracelet winner who amassed lifetime earnings over $1.6 million, was killed in a car accident. 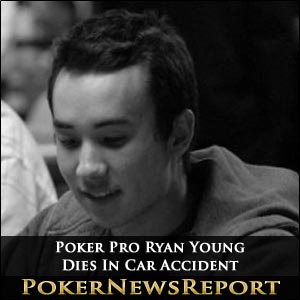 Ryan Young, a 2007 WSOP bracelet winner who amassed lifetime earnings over $1.6 million, was killed in a car accident.

Details regarding the automobile accident are scarce, but Daniel “KidPoker” Negreanu confirmed the young pro’s untimely death by tweeting, Really sad news: Poker Pro Ryan Young passed away today. Kid was a character, played with him in the main event this year. RIP Ryan.

Young played at PokerStars under the moniker “youngluck,” but told PokerListings following his bracelet victory that his Internet poker play had decreased following the changes in the online poker industry. Used to play a lot online, but not anymore because it kind of died out,” Young said. “There are less players out there.

Young had developed a reputation as being friendly and talkative on the felt. Vanessa Selbst also had kind words to say about the pro, tweeting, I’m also incredibly sad about Ryan Young’s passing. He was a treat to play with—such a vibrant, good-natured kid. Too young for that. RIP.

Taking home the bracelet in 2007 meant the world to Young, but he showed his compassion for others following his championship by saying, I feel bad for a lot of these really good players who make final tables but haven’t won a bracelet. I realize now how much it means. It means a lot.